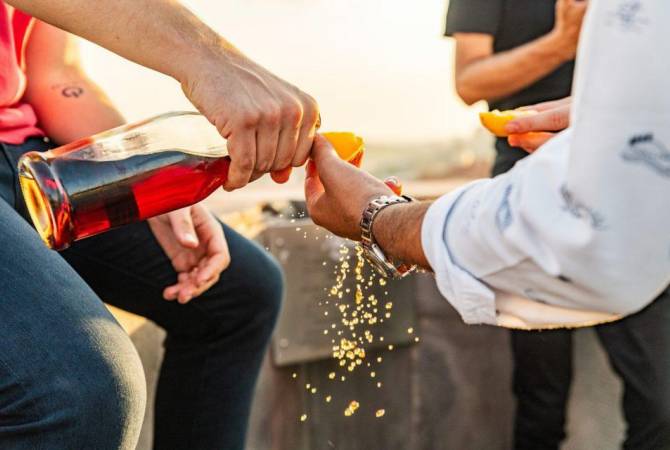 
YEREVAN, JANUARY 21, ARMENPRESS. The Reddit and Initialized Capital co-founder Alexis Ohanian has tapped into his Armenian heritage to bring to the American spirits market Armenian brandy, known as konyak in Armenia. Launched in collaboration with Flaviar, a direct-to-consumer spirits club with whom the entrepreneur had initially invested in via Y Combinator, the brandy is appropriately named Shakmat, the Armenian word for chess which is one of the country's most beloved traditions, ARMENPRESS reports, citing Forbes.

Ohanian is the Great Grandson of Armenians who fled the genocide. Since his very first visit to his homeland in 2010, he's searched for a way to pay homage to his heritage, a means of bringing a piece of Armenia back to America with him. During his time spent in Armenia, Ohanian was introduced to sipping local konyak out of halved apricots. In addition to chess, Armenia's other beloved tradition is this very activity: enjoying Armenian brandy.

“Armenian brandy is something Armenians are really proud of," explains Ohanian. "But outside of Armenia and the Armenian community, no one really knows it, which is a real shame-it’s legendary.”

After witnessing how Flaviar launched Son of a Peat, a whiskey, for its own members he decided to pitch them the idea of him launching his own spirit. Shakmat, the final product of the collaboration between Ohanian and Flaviar was launched on Nov. 12.

Author of the article Chelsea Davis chatted with Ohanian on how Shakmat evolved, his 24-hour research and development trip to Yerevan and his goal of spreading awareness of Armenia's rich culture with the rest of the world and more.

-Most Americans know nothing about Armenian brandy, what makes this spirit particularly special, one that you felt the desire to share with the rest of the world?

-Drinking brandy is an Armenian tradition that goes back many centuries and it’s something that everyone in the community knows and adores. Aside from Winston Churchill who apparently loved it, it hasn’t been exposed to the world, so now I’m trying to make that happen.

-Is your endgame to put Armenia on the world spirits map with the launch of Shakmat?

-Absolutely! I feel like Brandy in particular is due for a renaissance because so many original cocktails were brandy-based.

-What are you hoping comes out of this collaboration with Flaviar? How do you think the launch of Shakmat will help raise awareness of this country's rich culture?

-I’ve worked with the Flaviar team since I was advising them at Y Combinator about seven years ago. They understand the worlds of fine spirits and technology better than anyone and I couldn't imagine better partners to bring this brandy into the world with -especially now, given that the country just had a peaceful revolution and is modernizing.

-Talk a little bit about your 24-hour trip to Yerevan, Armenia and how this blend came together.

-It was a whirlwind! We landed before sunrise, ran out and caught a glimpse of the sun rising, and then proceeded to tour Yerevan, making stops at haunts from when I was living there and visiting different distilleries where we did final tastings. The Flaviar team did the legwork ahead of time (i.e. sorting grapes, picking the different juices, etc.), so we just did the final tastings and then feasted on a traditional Armenian dinner.

I also bought a few carpets to ship back to the US, and got together at one of the local bars with a bunch of different people who made the project possible. Another highlight of the trip was meeting the Prime Minister. It was a really exciting meeting and there is an optimism you can feel throughout the country because of the work he’s done and will continue to do to help Armenia thrive, reduce corruption and prosper. It’s exciting because Armenians have thrived all over the world and it’s only appropriate that the motherland thrives too. It’s absolutely a new chapter in the country’s history.

-Where did the inspiration for the flavors which ultimately found their home in Shakmat come from?

-The grapes are all Armenian grapes and the wood is Caucasian oak, which is part of the reason we’re partnering with the Armenian Tree Project on their reforestation initiatives. We want this to showcase the best of Armenian tradition as well as Armenian natural resources. It’s a 23 year-old XO brandy so it’s high quality, and it was important to us for people’s first exposure to Armenian culture and history to be best-in-class. I give a lot of credit to the Flaviar team for not skimping on anything to ensure the final product really tasted spectacular.

-What were some of the challenges in creating Shakmat's flavor profile?

-We tasted quite a few samples before deciding on a flavor profile. I wanted it to be something that you can use in cocktails and make a great old fashioned with, but could also stand on its own and be enjoyed neat. You don’t want it to be too sweet, or hit too hard —there’s a lot of nuance in the flavors and a complexity to it that we felt even someone who is not used to drinking brandy could appreciate —like a scotch drinker who has gone up and down the highlands and knows everything about scotch and whisky.

-Did you grow up playing Shakmat (chess)? Do you play now? If so, how has it shaped the way you do business?

-Ironically, my mom who is not Armenian taught me how to play chess. I played growing up but I’m not great at it. One of my favorite lessons about business is that, like chess, anyone can learn how the pieces move—the real challenge is knowing when to move them. There’s this element to the game of chess that I really like as an entrepreneur. You can learn the fundamentals of business pretty easily but that’s not what makes you great. Just like how you can learn that the knight moves in a L shape but that’s not how you become a grandmaster.

-Why did you choose the non-profit Armenia Tree Project to partner with in particular?

-I met Jason, the founder of Armenia Tree Project, on one of my many trips to Armenia a while ago and I’ve been impressed with all of the work he’s done over the years. The nonprofit has already reforested 5.5 million trees and they were excited about our commitment to transparency —like photographing each tree that gets planted stemming from the sale of Shakmat.

-How do you drink Shakmat?

-I drink it neat. If I have Armenian apricots handy, I cut them in half, take out the pit and use them as a glass to sip the drink.