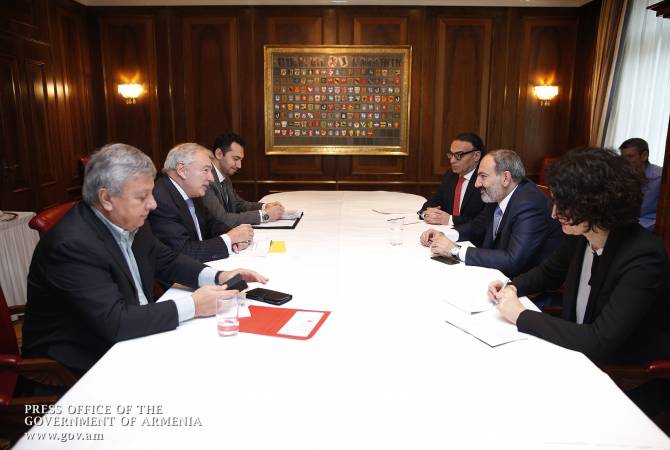 
YEREVAN, JNAUARY 21, ARMENPRESS. Prime Minister of Armenia Nikol Pashinyan, who is in Switzerland on a working visit, had meetings with a group of businessmen in Zurich during which he discussed the opportunities and prospects of implementing different investment programs in Armenia, the PM’s Office told Armenpress.

In particular, Pashinyan and Chair of the Switzerland-Armenia chamber of commerce Mike Baronian discussed issues relating to expanding the ongoing investment program in pharmaceutics in Armenia. Mike Baronian said currently the Yerevan company is engaged in the reprocessing of the raw material, and their goal is also to organize medicine production in Armenia and carry out an export. It is expected to invest more than a dozen million USD in the next five years by creating new jobs with high salaries. The official introduced the PM on investment programs relating to energy production and copper reprocessing via the latest technologies.

Swiss businessman Hans Schweikart introduced the Armenian PM on a major investment program in solar energy production. Nikol Pashinyan welcomed the Swiss businessman’s initiative and presented the government’s future strategy in the energy field, as well as the development prospects of that field. He proposed the businessman to discuss the issue linked with the implementation of the program with the ministry of energy infrastructures and natural resources aimed at effectively implementing it.

Pashinyan also met with the delegation led by CEO of the Franck Muller Group, famous Swiss-Armenian businessman and philanthropist Vartan Sirmakes, which included a group of businessmen. During the meeting a number of issues relating to the implementation of investment programs in the field of agriculture, food industry, construction, banking system, jewelry and professional education were discussed. The PM attached importance to the implementation of the presented programs in Armenia and expressed the government’s readiness to assist their implementation. Pashinyan said the government will continue the steps aimed at improving the business environment and is interested in the implementation of new investments and creation of jobs in Armenia.

Pashinyan also discussed the implementation of Old Yerevan program with Vartan Sirmakes. The PM highlighted the importance of preservation of historical-cultural monuments and the need to ensure maximal care for these buildings.