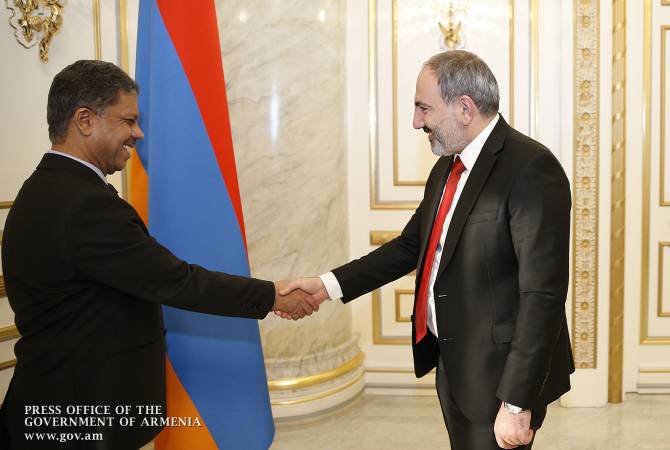 As ARMENPRESS was informed from the official website of the Prime Minister of Armenia, Nikol Pashinyan thanked the Ambassador the close cooperation and wished him success in future activities. The PM highlighted the development of political and economic relations between Armenia and the UAE, and hoped that in the future the partnership between the two states will continue expand and strengthen.

“We expect that in the near future we will witness new investors from the UAE and rise in the number of tourists”, Nikol Pashinyan said.

Jassim Mohamed Al Qasemi congratulated Nikol Pashinyan on being appointed Prime Minister of Armenia on behalf of the Government of the UAE, and expressed confidence that in the upcoming years new achievements will be recorded in the partnership between the two states, including in the spheres of trade turnover and tourism. The Ambassador noted that there are different investors in the UAE interested in investment projects in Armenia in the spheres of energy and agriculture and are ready to closely cooperate with the Government in that direction.

The sides highlighted the activities of the inter-state commission for giving new impetus to the cooperation and exchanged views on a number of issues on bilateral agenda.