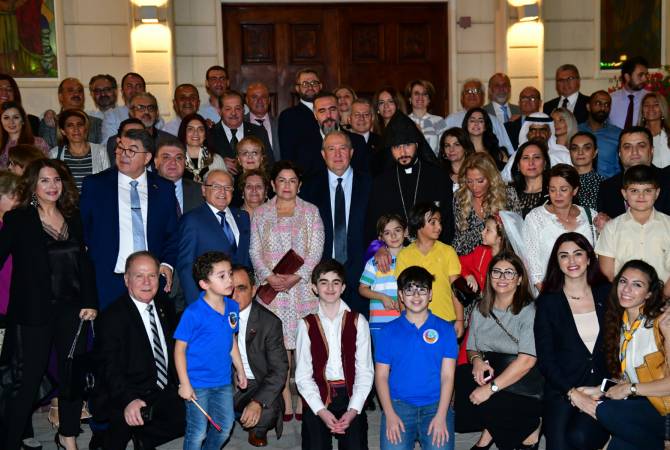 The President and his wife laid flowers at the cross-stone dedicated to memory of the Armenian Genocide victims erected in the yard of the Church.

After a prayer at the Church President Sarkissian met with the Armenian community representatives in the Ara Khanoyan Sunday school.

“Everything is gathered in one place – the Armenian statehood with its flag and emblem, the Armenian Apostolic Church and of course, our future – the school”, Armen Sarkissian said and thanked the community for the unity, dedication, patriotism and preservation of the national values. “I would like to live with you the day when we will forget the word Diaspora and will all be residents of Armenia. Eventually, Fatherland is the focus of all us, but I would also like to share another mind with you.

The fact that we live in different countries of the world, perhaps is not a disadvantage, but an advantage because we are one of the few peoples in the world who can clearly state that we are a small state or even have two small states, but a global nation closely connected with each other. We have created the small model of the 21st century because in the 21st century the whole world, the population of the entire world, no matter where we live, starting from Australia up to Russia, from Europe to the United States, will live as a one single family, a family of humanity. The world gradually becomes small as the population grows. It becomes small because we all are connected with each other.

It becomes small because 20 years ago if one said that changes, developments will take place in Armenia and you even can be the participant of that from far, perhaps most of you would say that it’s impossible, But now, just 20 years later, this is possible.

This opportunity enables all of us to think that our participation to Armenia is much deeper today and the opportunities are much greater. We are with the Fatherland not only with soul, heart and faith, each of you is also linked with the Homeland physically. The physical connection perhaps is an internet, virtual connection, but is very important. The participants of the recent great changes in Armenia, those of the velvet revolution or those of the revolution in an Armenian way, were not only the citizens of Armenia or those who were in the streets of Yerevan: many people were taking part in the revolution events. In some sense all our people from Los Angeles to Europe and Middle East, are living with the situation, events taking place in the Homeland, and with the Homeland in general.

I believe that our nation is a nation of the 21st century because many values will change in the 21st century: in the 21st century that nation or state will be powerful which will be able to unite the small forces in a small territory and bring its intellectual abilities to serve to the homeland, rather than the one that will have a very great natural wealth. I think we have all of these, moreover, I believe that we are God’s chosen nation. We are a nation who passed through the most impossible experiments by the choice of God, saw the world’s worst hell – the Genocide. But we not only exist today, but also we are strong and powerful. We are a victorious people. The next victories are ahead, and these victories are going to take place not only in the battle field, but also in all spheres of our national interests and statehood.

During these three-four days at each of my meetings in the United Arab Emirates I have heard one assessment about Armenians – honest, hardworking, dedicated, kind, patriotic people who can bring their knowledge, capacities, ties, desire and work to the Homeland from different parts of the world.

We are God’s chosen people and have no other way but to win and succeed”.

“You, your parents and grandparents were born in Armenia. Therefore, you all are residents of Armenia who temporarily live abroad, but one day all will return to the great, free, independent and democratic Homeland.

I am confident that you will not only return, but we will become one of the leading countries in the world because human knowledge, the ability to work, which we have, are going to be the greatest value in the 21st century. Therefore, I think that the 21st century is really going to be ours, but we will take the first steps on this path today”, the President stated.