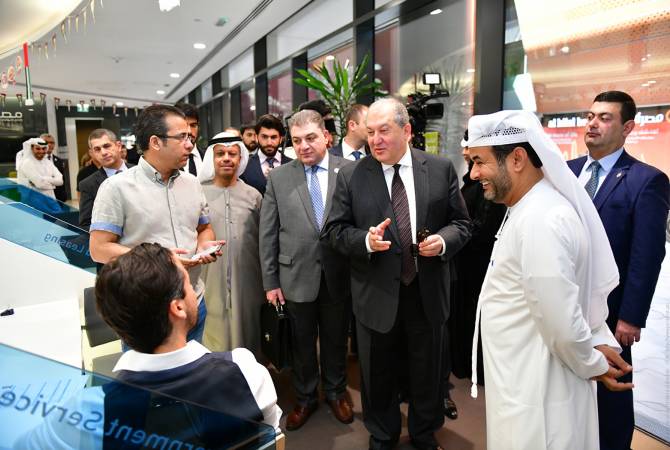 
YEREVAN, JANUARY 15, ARMENPRESS. While on an official visit in the United Arab Emirates (UAE) President of Armenia Armen Sarkissian on January 15 visited the Masdar City, the Presidential Office told Armenpress.

Masdar City is one of the world’s most sustainable urban communities, a low-carbon development made up of a rapidly growing clean-tech cluster, business free zone and residential neighbourhood with restaurants, shops and public green spaces. Masdar’s philosophy of urban development is based on the three pillars of economic, social and environmental sustainability. Masdar City is a greenprint for the sustainable development of cities through the application of real-world solutions in water, energy efficiency and the reduction of waste. At the same time, Masdar’s technology and education complex, in cooperation with the Massachusetts Institute of Technology, opens new education prospects for different countries, including for Armenian students.

Accompanied by Masdar City’s Executive Director Yousef Ahmed Baselaib, the Armenian President toured the City, was interested in its projects and programs, their implementation prospects and innovative ideas. The President also met with Armenian students of Masdar Maria and Arik, was interested in their education process and future programs.

“This is not just a city, but a combination of different ideas and approaches. This is both a city and scientific-research, educational center, but also a business and a foundation. This is also a great investment. In the past there were 10-11 Armenian students here. Unfortunately, their number is less now, just three students. But if we organize everything right, these students can return to Armenia in one or two years and apply the same ideas in Armenia”, Armen Sarkissian said, stating that these ideas in the 21st century will have a major place.

“I think this is a good example of a center with which we should definitely cooperate and create the Armenian example which will not be the same, but will be better”, he said.

The President also answered the questions of reporters and shared his vision about a future city. “It must have several components”, he said. “One of the components is very important – to have the latest technologies. Secondly, we must have a vision which will move ahead 20-40 years, we need to imagine where the world will be in several years and build the grounds which will take you there. And thirdly, to use our heritage, experience. You need to go back to your roots, understand how people lived in your territory and not to ignore that experience”.