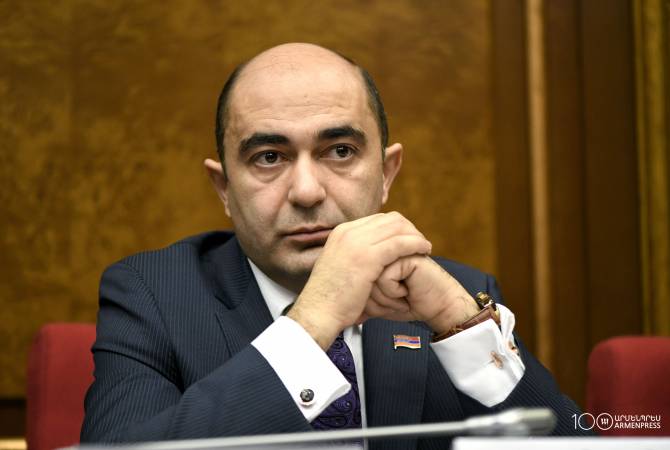 The parliament must elect three deputy speakers today. By law, one of the three seats of deputy speaker must go to the opposition, and the two opposition parties – Lusavor Hayastan (Luminous Armenia) and Prosperous Armenia have nominated their candidates pending confirmation.

“Yesterday we had very interesting discussions. Our Prosperous Armenia colleagues tried to respond to us with their speeches. An idea was voiced that Lusavor Hayastan is an opposition to the other opposition. I would like to dispel your doubts. Our speeches aren’t addressed to you. It would be unreasonable to address them to you. You have a candidate for deputy speaker, therefore you will vote for your candidate. Our speeches are addressed to the faction that doesn’t have a candidate for this position,” Marukyan said.

Marukyan said if lawmakers want to have an oppositionist deputy speaker then they must confirm their candidate Mane Tandilyan.

“Mane Tandilyan’s nomination didn’t happen artificially to cause debates. We nominated her for real,” he said.

“We must look at the path of the party. This is our approach. I fear that if your option doesn’t overcome this obstacles that are created today, then we might not have an oppositionist deputy speaker,” Marukyan said.

He added that even if the situations escalates then there should nothing personal should be sought.

The second sitting of the new parliament has kicked off.

Today, the confirmation hearings of the three Deputy Speakers will take place, as well as committee chairs.

The ruling My Step Alliance has nominated MP Alen Simonyan and MP Lena Nazaryan to be the two Deputy Speakers. By law, one of the three seats of Deputy Speaker must go to the opposition, and Prosperous Armenia and Luminous Armenia parties have nominated their MPs Vahe Enfiajyan and Mane Tandilyan for the position.