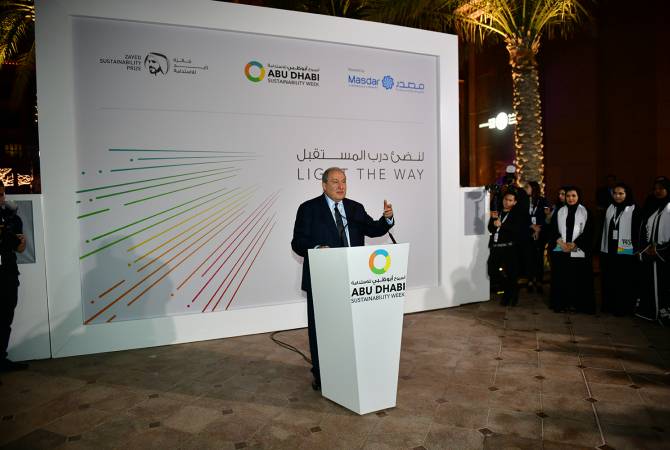 
YEREVAN, JANUARY 15, ARMENPRESS. President of Armenia Armen Sarkissian, who is in the United Arab Emirates (UAE) on an official visit, participated in a reception organized for the heads of delegations participating in the Abu Dhabi Sustainability Week (ASDW) international major forum, the Armenian Presidential Office told Armenpress.

In his remarks President Sarkissian thanked the UAE leadership and government for the invitation and opportunity to participate in the forum and touched upon several issues.

“We all understand that we are living in the 21st century which is very unique, where the world is mutually related, where everything is taking place at the speed of light. This is absolutely a different world. I would like to briefly talk about two-three things. The first one is globalization. There are some discussions according to which today globalization has stopped. I do not agree with this at all. Globalization is not a macro-process anymore, it’s a micro-process. People, trade, relations, ties, information in the world are so interconnected that the globalization will continue and will develop with a greater pace. Secondly, we talk about industrial revolution, the 4th industrial revolution. What we are going to have will be a swift or steady revolution because it will occur both in science, technologies and trade, biology, as well as in our behavior”, the Armenian President said.

He highlighted that swift revolutions will also take place in our daily life. They occur in the world today, the example of which is Armenia.

“Nearly one year ago, on April 9, I became the President of Armenia. Days before that a revolution has started in Armenia, with five persons, but then their number reached 100, 500, 1000, 5000… Within two weeks we had a revolution with participation of hundreds of thousands of people. And this was not organized, this has not been done by a political force. It was a “Facebook” revolution, a revolution of the 21st century. This means that swift revolutions will also take place in our political life. The world is becoming more and more non-classical day by day. I would like to bring an example from quantum physics. 100 years ago physicists were understanding everything what was taking place around the world and they were able to explain everything. But gradually some phenomena appeared which they were unable to explain because the ideas of classical mechanism were not working anymore, the logic of classical physics was not working. And this lasted so long until Albert Einstein, one of the giants, created something which was dealing with the behavior of elementary particles, which was not absolutely classical”, the President said.

Armen Sarkissian said in the 21st century we are entering into an era of global risks, as well as the quantum behavior of politics. According to him, the social and political events will have absolutely different behavior in the 21st century. The behavior of global risks will be completely different from that of the 20th century in case of technologies, epidemics or terrorism. The risks existing in New York or Washington D.C., can cause major changes across the globe. People can lose millions of dollars.

“Therefore, if the risks are quantum, their solutions must also be quantum. Thus, welcome to the 21st century where each of you must think differently, be creative, as well as quantum…

Here I want to stop because these are just small parts from my book which I will complete soon. It will be published in spring and will be called the “Quantum Behavior of Global Risks”, Armen Sarkissian said.