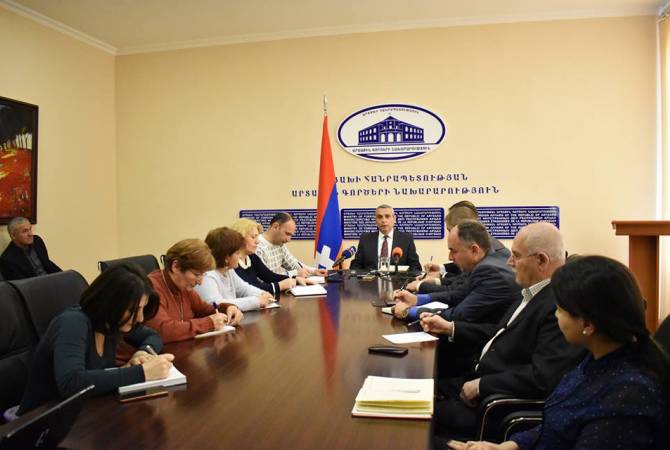 Speaking of the results achieved in the process of the international recognition of Artsakh and the development and strengthening of decentralized cooperation, Masis Mayilian noted that on May 22, 2018, Australia’s Ryde City Council unanimously adopted a resolution supporting the independence of the Republic of Artsakh. The geography of decentralized cooperation also expanded, covering the Middle East region. Generally, in 2018, friendly relations were established between 6 cities of Artsakh and foreign countries.

At the same time, consistent steps were taken to give a practical character to the relations established within the decentralized cooperation. In particular, work has been done on the implementation of practical programs in the spheres of education, agriculture, tourism and creation infrastructures in different communities of Artsakh. Visits of delegations headed by mayors of 5 foreign cities to Artsakh were also organized, within the framework of which the prospects of implementing joint programs in different spheres were discussed.

Masis Mayilian also touched upon the MFA activities carried out to develop and deepen the international relations of the Republic of Artsakh. He underlined the importance of expanding the international cooperation of Artsakh and its involvement in international processes for confronting the isolation policy carried out by Azerbaijan against Artsakh. In this context, the Foreign Minister noted that in 2018, the Ministry contributed to the organization of visits of official delegations from the Republic of Artsakh to some foreign countries, as well as visits of delegations from different foreign countries and international structures to Artsakh. In this context, the Foreign Minister highlighted the first political visit of the Artsakh Republic’s delegation, led by President Bako Sahakyan, to the USA taken place in March 2018, noting its importance in terms of presenting Artsakh's position on the realities, political processes and regional problems existing in the Republic to the official and analytical circles of the USA as an OSCE Minsk Group co-chairing state.

Foreign visits of leaders of ministries and agencies of the Republic of Artsakh to some foreign countries also took place.

The Foreign Ministry contributed to the development of cooperation with different countries in the format of parliamentary diplomacy. In this context, Mr. Mayilian noted the importance of the visit of Chairman of the National Assembly of the Republic of Artsakh Ashot Ghulyan to France, as well as the visits of MPs to the United States, Europe and the Middle East. Also, visits of parliamentary delegations from the European Parliament, Cyprus, Belgium, France, as well as from the US state of California to Artsakh were organized.

The Foreign Minister of Artsakh also touched upon the Azerbaijan-Karabakh conflict settlement process. Masis Mayilian stressed the importance of excluding the prospect of war and ensuring stability in the conflict zone. He noted that Artsakh authorities had always assisted the OSCE Mission in monitoring the ceasefire regime on the state border of Artsakh and Azerbaijan and on the Line of Contact between the parties’ armed forces, as well as supported the expansion of the Office of the Personal Representative of the OSCE Chairperson-in-Office and its monitoring capacities.

At the same time, the Foreign Minister stressed the necessity of implementing the agreements reached in 2016 in Vienna and St. Petersburg, aimed at maintaining stability on the Line of Contact and creating conditions for advancing the settlement process. In this context, he noted that Artsakh had unilaterally established a video system for permanent monitoring of the Line of Contact, which could be part of the international mechanism for monitoring the ceasefire regime.

Masis Mailyan stressed that in order to reach a final settlement of the conflict and ensure progress in the negotiations, it is necessary to return the official Stepanakert to the negotiating table as a full party. In this context, he noted the importance of the fact that the position of the Republic of Armenia on the Azerbaijani-Karabakh settlement after the change of power became clearer, in particular, on the need to restore the full-fledged trilateral format of negotiations, and this position fully coincides with the approaches of the Artsakh authorities. The Foreign Minister confirmed the willingness of the Artsakh authorities tօ de jure assume their share of responsibility for maintaining peace and stability in the region.

The Foreign Minister also noted that the MFA had conducted consistent work on presenting the position of the Republic of Artsakh on various aspects of the Azerbaijan-Karabakh conflict in international organizations. In particular, about ten Memorandums of Artsakh’s Foreign Ministry and other documents were disseminated as official documents in the UN, the OSCE, the Council of Europe and other international structures.

For the first time in 2018, two voluntary reports were prepared on the implementation of the provisions of the International Covenant on Civil and Political Rights, which the Republic of Artsakh unilaterally joined on November 26, 1992, as well as on the implementation of the goals of the 2030 Agenda for the UN Sustainable Development in Artsakh, which were sent to relevant United Nations structures.

During the press conference, Masis Mayilian also noted that the Foreign Ministry and the Permanent Representatives of Artsakh to foreign countries had implemented consistent activities on raising the awareness of Artsakh abroad and providing objective information on the Azerbaijan-Karabakh conflict to the international community, involving also new resources.

In 2018, 127 journalists, representing about 45 foreign mass media, visited Artsakh. The new official website of the Foreign Ministry was launched, which is available in Armenian, Russian and English. Also, the film “Artsakh: History and Conflict”, created by the Artsakh MFA, was widely disseminated. It is designed for the foreign audience and is still available in two languages - Russian and English.

In 2018, the Permanent Representations of Artsakh to foreign countries organized various events dedicated to the 30th anniversary of the Karabakh Movement and the Armenian Genocide in Sumgait. The events within the framework of the ‘Days of Artsakh in France’ Festival were continued and were held in all the 12 cities of France, which had established friendly relations with the cities of Artsakh.

One of the important directions of foreign policy is strengthening ties with the Armenian diaspora. Work has been done to strengthen multilateral ties with various communities and unions of the Diaspora. Armenian communities assisted in the implementation of development programs in Artsakh.

In conclusion, Masis Mailyan stressed that in 2019, the Artsakh Foreign Ministry will continue its consistent work on international recognition of the Republic of Artsakh, expanding and developing international cooperation, including deepening foreign economic ties, strengthening and expanding relations with the Diaspora, providing the international community with credible information on Artsakh related issues and strengthening the country’s positive image, as well as on the peaceful settlement of the Azerbaijan-Karabakh conflict and restoration of the full-fledged trilateral format of negotiations.