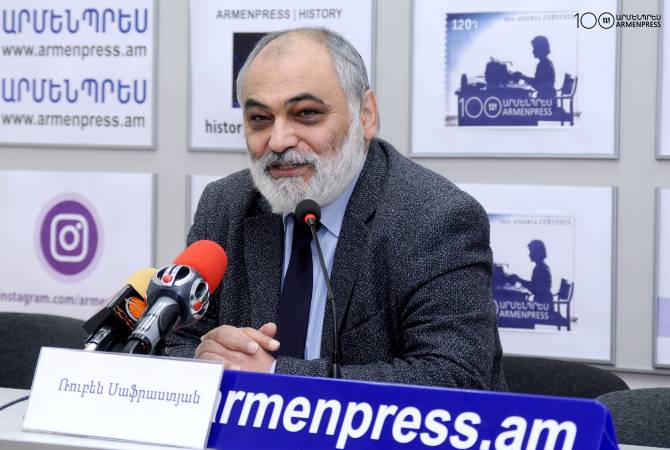 
YEREVAN, JANUARY 11, ARMENPRESS. It’s still too early to talk about the end of war in Syria, Ruben Safrastyan – Director of the Oriental Institute, told a press conference in Armenpress, stating that the Turkish armed forces are waiting for an order at the border to once again enter into Syria.

“Everything started when the United States announced withdrawing its troops from Syria. This led to new developments, in the center of which Turkey appeared. The latter urged the US either to eliminate or transform to the Turkish side the 22 military bases deployed in Syria’s north. But the US opposes this demand, meanwhile Turkey supposes that these military bases will be left for Kurds. Here we see that there is a problem between the US and Turkey”, Ruben Safrastyan said.

The next problem between the two countries is that Turkey calls the armed organizations consisting of Kurds as terrorist organizations, but the US considers such characterization unacceptable because some of these groups were fighting together with the Americans. Erdogan clearly stated that they will fight against terrorists up to the end, meaning the Kurdish squads.

“Currently the Turkish army stands on the border, is ready for getting an order, and the Turkish authorities announce that that order will sooner or later be given”, he said.

Safrastyan said in such circumstances Kurds started self-defense. They were seriously concerned that Turks would enter into Syria. They have applied to the Syrian government for assistance. Safrastyan noted that Kurds tried to counteract the Turkish operations. Ruben Safrastyan said currently US-Turkey trade deal is underway which can lead to decline of Turkey’s role in Syria.

At the same time there are talks on Syria’s restoration. “Quite positive developments are expected in terms of providing financial aid to Syria. The statement, according to which Saudi Arabia is ready to provide assistance to Syria’s restoration works, was interesting. If this happens, a serious process will launch”, he added.

Talking about the Syrian-Armenian community, Ruben Safrastyan said Armenians gradually return. He highlighted the fact that Syrian President Basher al-Assad announced that he will restore the Armenian church in Deir ez-Zor with his own resources.

“This is a symbolic step, the Syrian leadership shows that they are interested in the return of Armenians, this is a green light for return”, he stated.