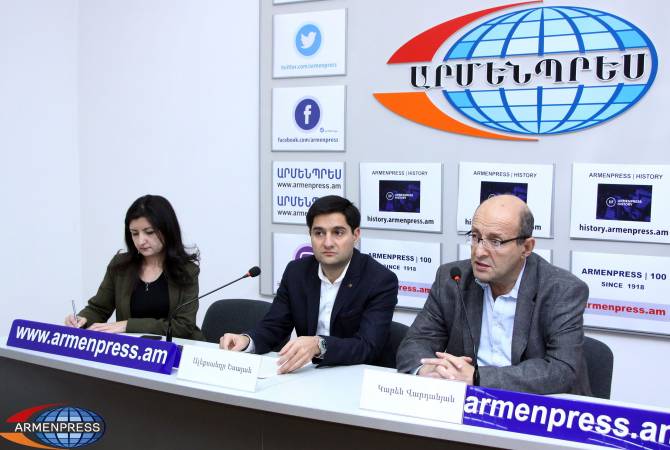 
YEREVAN, DECEMBER 20, ARMENPRESS. 2000-2500 visitors from different countries of the world are expected to arrive in Armenia to participate in the World Congress on Information Technology (WCIT) 2019 in October.

Alexander Yesayan, chairman of the Union of Advanced Technology Enterprises (UATE), told a press conference in Armenpress that quite extensive works have been carried out in 2018 for the organization of the Congress.

“Important agreements have been reached on the sidelines of visits to several countries. A meeting was held with the respective partners in Taiwan. We have reached a preliminary agreement to hold an exhibition with Computex, one of the largest computer and technology trade shows in the world. Taiwan companies will be presented at the upcoming Congress in Armenia. We expect visit of delegation from Taiwan to Armenia in March”, he said, adding that the names of famous companies, the leaders of which will attend the WCIT, will soon be announced. Discussions are also underway with Facebook, Google, Amazon and other companies.

Alexander Yesayan said they are also actively cooperating with the Armenian government and have the state support for holding the Congress at the highest level.

“We will try to take actions to make the Congress participants be interested in Armenia’s potential. The first issue such major companies are interested in is the number of specialists. They must understand how many people work in the field and how much their number grows every year. We have quite successful companies across the world, which is important indicator, and we should try also to show our potential in education field. In this context Armat is an important initiative within the frames of which many school-children, young people are involved in the IT field”, the UATE chairman said.

UATE CEO Karen Vardanyan said in addition to demonstrating the potential, success and achievements in the IT field, it’s also very important to show Armenia’s hospitality.

“We should show the human features of the Armenian people, their hospitality. It is necessary to make efforts to create a good atmosphere so that the Congress participants will remember our country, would like to visit again and work here. The preliminary actions are also very important so that the topics of the Congress will be interesting to the world”, Karen Vardanyan said.

The World Congress on Information Technology (WCIT) is the largest and the most reputable international event among worldwide IT leaders.

It brings together high-level officials from different countries, heads of multinational organizations, universities and scientific research centers, non-governmental organizations' representatives and many more.

The event includes discussions of legal, political and economic trends affecting IT business processes, presentations of innovative solutions, B2B meetings and so on.