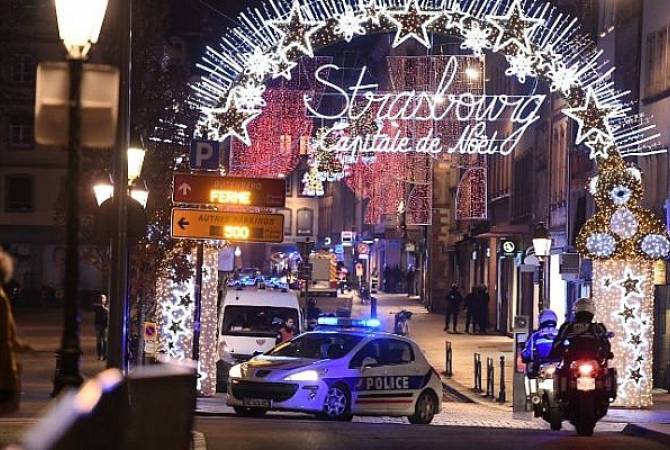 
YEREVAN, DECEMBER 12, ARMENPRESS. There are no Armenian nationals or ethnic Armenians among victims of December 12 incidents in Strasbourg, ARMEPRESS reports Armenia’s permanent representation to the Council of Europe informed on its Facebook page.

“The Permanent Representation of Armenia to the Council of Europe carried our works immediately after the Strasbourg incidents to find out the situation with the Armenian officials employed at the secretariat of the Council of Europe, representatives of the Armenian community, representatives of various state bodies of Armenia who are in Strasbourg on a working visit.

According to preliminary data of the permanent representation, there are no Armenian nationals or ethnic Armenians among the victims of Strasbourg incidents.

We recommend to follow the official news of France and refrain from visiting crowded places.

The permanent representation is in touch with the authorities of Strasburg. In case new information emerges, we will  inform immediately”, reads the statement of the Permanent Representation of Armenia to the Council of Europe.

France has upgraded its security threat level as hundreds of police hunted a gunman who shot three people dead and injured 12 others in a terror attack on Strasbourg’s celebrated Christmas market on Tuesday evening, reports The Guardian.

Six hours after the gunman disappeared after firing at passers-by in the busy city centre, the interior minister, Christophe Castaner, said the government had raised the risk level to the highest category.

The move would strengthen border controls and bolster protection of Christmas markets and other events.

Police immediately cut off major roads in and out of the city and launched a massive operation involving 350 police gendarmes and soldiers, as well as helicopters, to find him. French security services said they had identified the gunman as a 29-year-old born in Strasbourg, known to police and also on the “Fiche S” list of potential security threats.

The French president, Emmanuel Macron, immediately held a crisis meeting at the interior ministry in Paris.

Police asked residents in the centre of Strasbourg to stay at home bars and restaurants were ordered to close and not let customers leave. Hours after the shootings, thousands of people remained unable to leave city centre restaurants, bars, libraries, and other public buildings following police orders for everyone to stay off the streets. About 5,000 people were stuck inside the local sports stadium. The BBC reported the order was lifted in the early hours of Wednesday.

The European parliament, which is sitting in Strasbourg, was put on lockdown, and the parliament’s safety awareness division sent a message to MEPs advising those dining in the city centre to “please stay inside and don’t go out”.