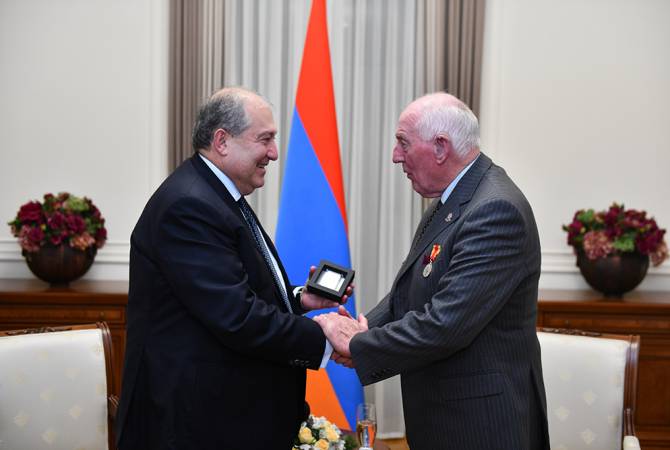 The latter paid his first visit to Armenia about 30 years ago as a firefighter-rescuer to participate in the activities aimed at eliminating the consequences of the 1988 devastating earthquake and the search operations.

President Sarkissian remembered the assistance provided by the UK government and people to Armenia during that days, stating that the Great Britain broadly reacted to this tragic disaster.

“The United Kingdom provided great assistance by sending rescuers, firefighters and ambulance vehicles. School, called after Lord Byron, and a hospital were built by the donations of Aid Armenia established there. Later the historical visit of UK Prime Minister Margaret Thatcher to Armenia took place. These are actions which Armenia will never forget”, Armen Sarkissian said.

Paul Burns remembered the activities carried out with his colleagues during the days following the earthquake and shared his impressions from that difficult moments.

By using this occasion the Armenian President thanked the British society and the whole people in the person of Paul Burns whom he knows personally. “I have met with Mrs. Thatcher for many times when she already left the public service and was engaged in the activities of her foundation. And every time we were talking about this or that thing, we always remembered her visit to Armenia during any day or any discussion. The only thing we regretted was that she toured only the regions in Armenia which were affected by the earthquake”, President Sarkissian said.

“What you have done for Armenia during that difficult days will never be forgotten”, the President said and expressed gratitude to Paul Burns.

In memory of gratitude and that day, President Sarkissian handed over an Armenian memorial coin on Armenian carpet weaving to Paul Burns.

“This will also be a reminder that the Armenian perfect culture is immortal regardless of all our tragedies such as the Genocide and the earthquake”, Armen Sarkissian said.