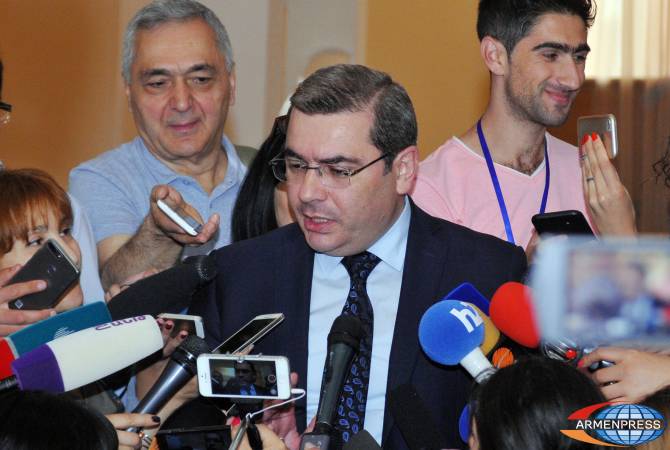 “In Gazprom Armenia, shall we say, planned inspections were carried out,” he said, adding that the SRC had published a list of taxpayers subject to inspections based on risk assessment for the July 1, 2018 – June 30, 2019 period, and that the list includes Gazprom Armenia.

“During these inspections, the tax agents have discovered certain information that has been presented to the SRC investigative department and a report was made on carrying out further inspections. At this moment, the investigator has launched a criminal case based on this report, Ananyan said, stressing that filing a criminal case is not a conviction.

He said that investigators must take the kind of actions during the probe which they would’ve been unable to carry out during simple inspections.

The State Revenue Committee (SRC) of Armenia said November 14 it has revealed fraud at Gazprom Armenia.

SRC said it has inspected Gazprom Armenia as part of ongoing anti-fraud operations of the agency and discovered a number of violations and major tax evasion cases.

SRC said that in 2016 and 2017 Gazprom Armenia has reported fake data in its VAT and profit tax calculations to taxation authorities which resulted in ‘several billions drams less calculated tax obligations’.

The State Revenue Committee said that the research data on the volumes of supplied natural gas to filling stations (natural gas stations) also prove fraud. SRC said that Gazprom Armenia’s volume of loss in the distribution network reduced on an average of more than 3 times in June-July 2018 compared to January-May of the same year. At the same time, according to the SRC, the volumes of Gazprom Armenia’s supplies to the filling stations in June-September 2018 has increased nearly 37% as compared to the first five months of the year.

The SRC said it has launched a criminal investigation on major tax evasion based on the findings.

Gazprom Armenia issued a statement the same day a criminal investigation was announced against the company.

In the statement, Gazprom Armenia said that the SRC began complex inspections since October 1, 2018 on ‘accuracy of budget relations’. “Afterwards, on October 17, the inspection duration was extended for 30 consecutive business days. The complex tax inspection is factually ongoing at the moment and until now the SRC has not presented any instance of tax legislation violation to Gazprom Armenia. Instead, without discussing with the company and without notifying, the SRC distributed totally unsubstantiated information through the press,” Gazprom Armenia said in a statement.

Gazprom Armenia reminded that for many years it has been the largest taxpayer in Armenia and it has carried out its operations exclusively within the law, for which it has regularly been awarded certificates of appreciation.

The company said that the “comparative studies” mentioned in the SRC’s statement have been carried out based on incomparable time periods and incomparable volumes, and that the company has not received any evidence from the tax authority which led to ‘ridiculous conclusions’.

“This kind of a conduct by the SRC might jeopardize the reputation of the company and cause failure in its normal functioning,” Gazprom Armenia said.

Gazprom Armenia said it is organizing a press conference on the matter on November 15, and invited SRC officials to be present and substantiate their conclusions.