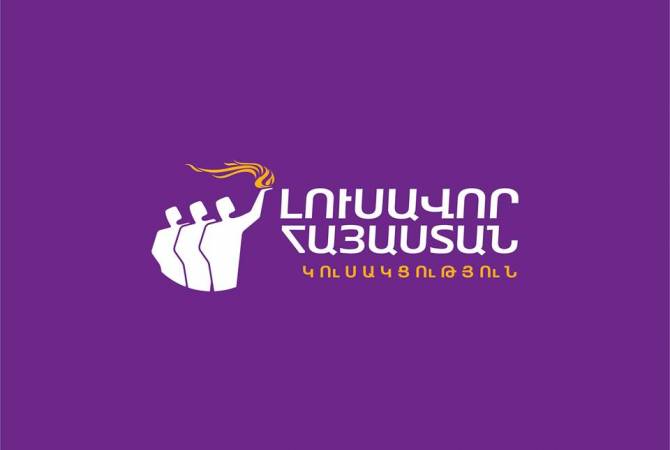 
YEREVAN, NOVEMBER 4, ARMENPRESS. Lusavor Hayastan (Bright Armenia) party has released a statement about the format of its participation in the upcoming early elections of parliament.

“Lusavor Hayastan party has put the mission of systematic, irreversible reforms at the foundation of its establishment. The party’s participation in the first parliamentary elections by the Yelk alliance of parties became historic and fateful not only in the modern history of our people, but also individually for each party of the Yelk alliance. The revolution that took place in Armenia has qualitatively changed the political priorities in the country by enabling equal participation opportunities for the first time to each subject that takes part in political processes.

Lusavor Hayastan will also involve in its list representatives from other political forces and active civil groups sharing similar ideology. After the Yerevan City Council election, highly valuing the jointly passed path together with the Hanrapetutyun party by the Luys alliance, the parties will continue cooperation in the Yerevan City Council within the framework of the Luys faction.

Lusavor Hayastan party thanks its partners from the Yelk alliance by finding the many years of extra-parliamentary and parliamentary productive work with the two – Hanrapetutyun and Civil Contract parties, to be invaluable and important. We believe that the powerful potential of united joint work is not exhausted, therefore we wish each of them good luck in the upcoming election for the benefit and welfare of the Republic of Armenia and citizens of the Republic of Armenia,” the statement says.

Early election of parliament will take place December 9 in Armenia.