Presentation of book “Perspectives of Co-Existence of the EU and EAEU Integration Processes: The Case of Armenia” held in Yerevan | ARMENPRESS Armenian News Agency

Presentation of book “Perspectives of Co-Existence of the EU and EAEU Integration Processes: The Case of Armenia” held in Yerevan 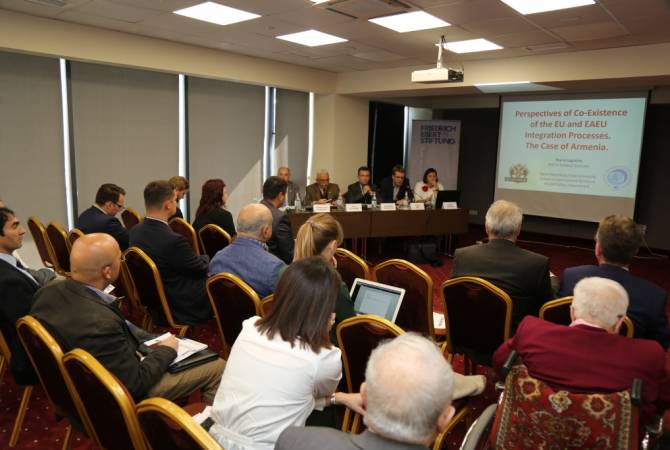 
YEREVAN, OCTOBER 19, ARMENPRESS. On October 18, Political Science Association of Armenia (PSAA) and the Friedrich Ebert Stiftung office in the South Caucasus jointly organized the presentation of the bilingual English/Russian book “Perspectives of Co-Existence of the EU and EAEU Integration Processes: The Case of Armenia”, PSAA told Armenpress.

H.E. Ambassador Extraordinary and Plenipotentiary of Federal Republic of Germany to the Republic of Armenia Mr. Bernhard Matthias Kiesler, representatives from the embassies of Russian Federation, Poland, Romania, and the EU delegation to Armenia, as well as PSAA members and experts on regional security dynamics attended the event.

In the context of Russia – West strategic contradictions the experts and participants emphasized the significance of pursuing of balanced foreign policy by Armenia which allows Yerevan to position itself as an efficient hub of cooperation between the European Union and Eurasian Economic Union.

The speeches were followed by a discussion during which participants expressed their views on the possibilities of EU – EAEU cooperation, and Armenia’s role in it.

21:29, 09.24.2021
Viewed 2261 times Today, no Armenian lives or practically could live in the territories under the control of Azerbaijan – Pashinyan