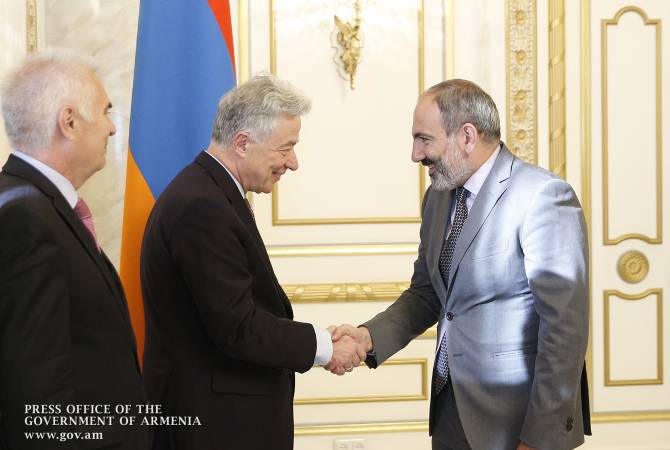 As ARMENPRESS was informed from the office of the acting PM, Pashinyan highlighted the continuous development of Armenia-EU relations and hoped that it will reach a new level as a result of joint efforts. Nikol Pashinyan referred to the political changes in Armenia and the upcoming early parliamentary elections, noting that the activities of the Government are aimed at the development and strengthening of democracy, holding free, fair and transparent elections like the recent elections of Yerevan City Council. Nikol Pashinyan noted that the results of the mentioned elections were not questioned by any political force and all the participants congratulated the winner.

The acting PM highlighted the cooperation with the EU in the sidelines of the Comprehensive and Enhanced Partnership Agreement for the implementation of reforms in various spheres.  He emphasized that the Government of Armenia resolutely pursues the path of developing democracy, justice, education, civil society, governance system, infrastructures, as well as protection of human rights. At the same time Nikol Pashinyan noted that the Government of Armenia highlights the active role of women in the social-political life of the country and takes measures to increase their presence in the state administration system.

Thomas Mayr-Harting congratulated Nikol Pashinyan on organizing the 17th summit of Francophonie at a high level and referred to the issues on the Armenia-EU agenda. He emphasized that the EU salutes the mentioned activities of the Armenian Government and is ready to assist in reform implementation.

The interlocutors discussed issues referring to Nagorno Karabakh conflict settlement and highlighted the creation of a favorable atmosphere for negotiation process. Pashinyan and Thomas Mayr-Harting emphasized the necessity of an exclusively peaceful settlement of the conflict in the sidelines of the OSCE Minsk Group Co-chairs’ format.

The sides also exchanged views on other international issues.