Terrorism not ruled out in Crimea explosion - Kremlin 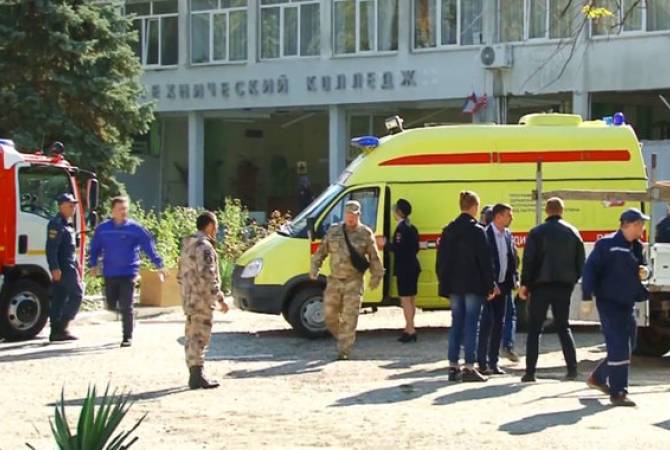 
YEREVAN, OCTOBER 17, ARMENPRESS. Kremlin spokesman Dmitry Peskov has stated that a terror attack is a possible version of the explosion that shook a college in Kerch, Crimea, TASS reports.

"It [the terror attack version] is being studied," the Kremlin spokesman told journalists.
A blast that rocked a technical college in Crimea’s Kerch was caused by an unidentified explosive device, the National Anti-Terrorism Committee told reporters on Wednesday.

"Today at around noon an explosion occurred in the building of a polytechnic college in the city of Kerch, in the Crimean Republic. According to preliminary data, 10 people were killed and another 50 were wounded," the anti-terror committee said.

Bomb disposal squads from the Federal Security Service (FSB) are working at the scene and an investigation is underway.

An emergency response center is coordinating the steps of law enforcement agencies and rescue services on establishing the cause of the blast and preventing other possible explosions, an NAC spokesperson said.

The FSB, the Interior Ministry, the National Guard and the Emergencies Ministry have arrived on the scene. The area close to the college has been cordoned off and the building is currently being evacuated.

Those injured have been hospitalized and are receiving medical and psychological assistance.

Russian President Vladimir Putin has offered condolences to the relatives and friends of the victims, Dmitry Peskov told news media.

"The president offers deep condolences to those who lost their relatives and dear ones as a result of this explosion," he said.

An explosion at a polytechnic college in Kerch on Wednesday claimed ten lives, according to the latest reports.

About 50 people were wounded.