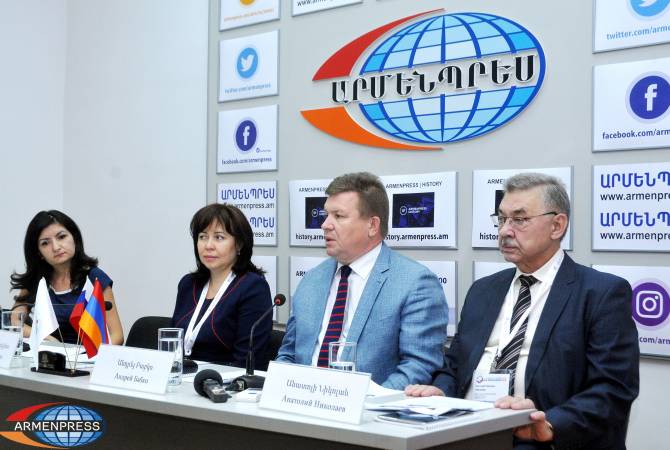 
YEREVAN, OCTOBER 15, ARMENPRESS. In the first half of 2018 the trade turnover volume between Armenia and Russia has surpassed the figure of the same period of 2017 by nearly 26%, Andrei Babko, Russia’s commercial representative to Armenia, told a press conference in ARMENPRESS.

“Russia plays key role in Armenia’s economy, there are a lot of companies. Nearly 37% of all foreign direct investments in Armenia are Russian. By looking at the figures of the first half of 2018, we can state that we will have good results also by the end of the year”, he said.

Andrei Babko said Russia is trying to promote not only the export to Armenia, but also vice versa. The Russian side is trying to assist the Armenian companies to find their place in the Russian market.

“As you know, traditionally, agricultural goods, as well as brandy, wine are imported to Russia. In addition, the import of textile and footwear from Armenia to Russia has become quite active. The Armenian goods are demanded in Russia and distinguished by their quality”, he said.

During the press conference the reporters asked whether the recent political events in Armenia affected the Armenia-Russia trade, investment volumes.

“I would like to note that before these events we have already established cooperation. The political events didn’t affect in a sense that everything was going on its path. We see that Armenia and Russia maintain and implement at a political level the agreements of the previous years. We see activeness of contacts between Armenian Prime Minister Nikol Pashinyan and Russia’s President Vladimir Putin, Prime Minister Dmitry Medvedev. It’s another matter that while engaged in political reforms one should not forget that it is necessary to continue assisting and contributing to forming a favorable environment for investments”, Andrei Babko said.