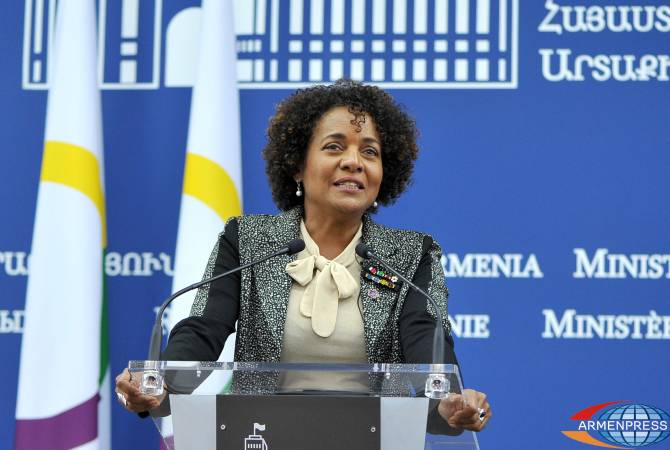 
YEREVAN, SEPTEMBER 11, ARMENPRESS. Being a member of the International Organization of La Francophonie, Armenia is able to be a part and member of a huge space which has its goals on the levels of both security and sustainable development and dialogue, Secretary General of La Francophonie Michaelle Jean said at a press conference in the Armenian foreign ministry headquarters today.

According to her, for the La Francophonie summit Armenia has chosen one of the most important topics: Living Together, in solidarity, and this is a very important condition for prosperity and peace. “We are very happy and joyful that Armenia is hosting this summit. It is a great pleasure to be in Armenia as the Secretary General of La Francophonie,” she said.

Jean noted that important decisions will be made during the summit. Those candidates willing to join the La Francophonie will also be discussed at the summit. During this visit to Armenia, the Secretary General has already visited the Armenian Genocide Memorial and the TUMO Center in Yerevan. “I had the joy to speak to the youth in Tumo and to see how they are assuming the responsibility of being a generation of this velvet revolution. They wonderfully and fluently speak French,” she said.