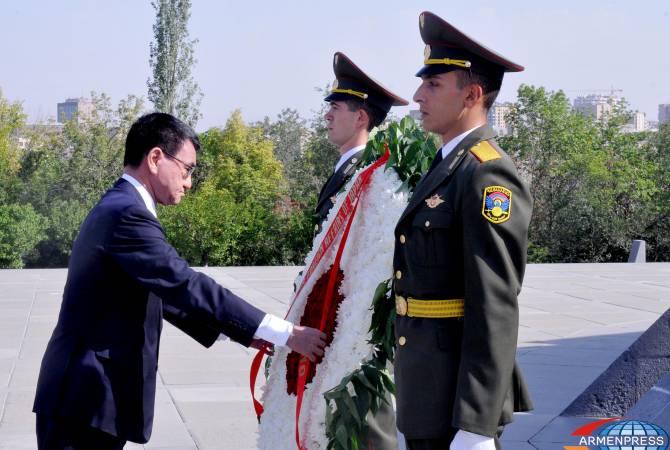 
YEREVAN, SEPTEMBER 3, ARMENPRESS. Foreign minister of Japan Taro Kono, who arrived in Armenia on an official visit on September 2 at the invitation of foreign minister Zohrab Mnatsakanyan, paid tribute to the memory of the Armenian Genocide victims in the Tsitsernakaberd Memorial, reports Armenpress.

The Japanese FM laid a wreath at the Memorial and flowers at the Eternal Flame.

He was accompanied by deputy foreign minister of Armenia Armen Papikyan and Armenia’s Ambassador to Japan Hrant Poghosyan.

Director of the Armenian Genocide Museum-Institute Marine Margaryan accompanied the guests and introduced them on the construction history of the Memorial.

The Japanese FM is scheduled to meet with President Armen Sarkissian and Prime Minister Nikol Pashinyan.

On September 3 the Armenian and Japanese FMs will hold talks which will be followed by a joint press conference summing up the results of talks.