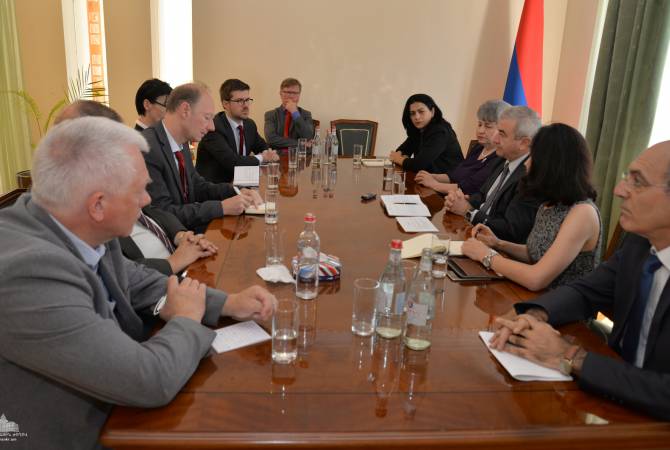 
YEREVAN, AUGUST 29, ARMENPRESS. Speaker of the Parliament of Artsakh Ashot Ghoulyan on August 29 received the members of the delegation led by member of the European Parliament Martin
Sonneborn who arrived in Artsakh accompanied by chairman of the European Armenian Federation for Justice and Democracy (EAFJD) Gaspar Karapetyan and Executive Director of the Federation Heghine Evinyan, the Artsakh Parliament told Armenpress.

Welcoming the guests, the Speaker of the Parliament expressed confidence that such visits enable to expand the list of Artsakh’s friends in Germany and Europe and will create new opportunities for the European Parliament and their political groups to be more informed about Artsakh. In this context he highlighted the need to shift to institutional relations with the European structures.

In his turn MEP Martin Sonneborn said they support the peoples’ right to self-determination and in this sense are ready to assist the Artsakh people.

The meeting was also attended by Vice Speaker of the Parliament Vahram Balayan and chairman of the parliamentary standing committee on foreign affairs Arzik Mkhitaryan.

Following the narrow format meeting, the MEP and his partners met with the members of the Artsakh-European Parliament friendship group.

Head of the friendship group Vahram Balayan expressed hope that this new cooperation will be long-lasting and productive.