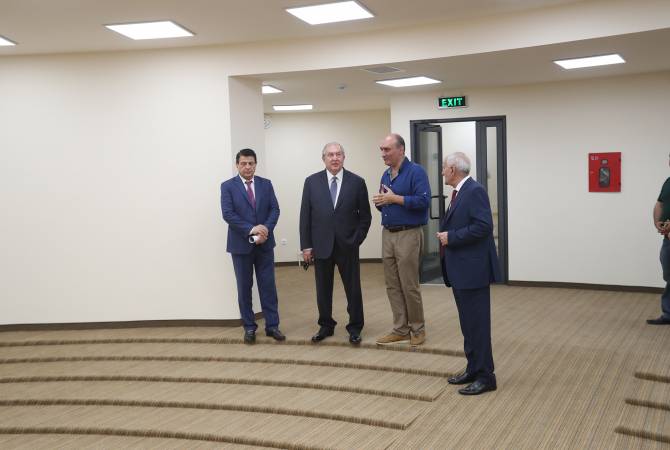 
YEREVAN, JULY 25, ARMENPRESS. Armenian President Armen Sarkissian on July 25 visited the Hrant Matevosyan center-museum building in Yerevan where he got acquainted with the construction works. Accompanied by Davit Matevosyan, son of the renowned writer, the President toured the building.

“Hrant Matevosyan’s 85th jubilee is marked in 2020. The great master deserves that his art, literature are presented beautifully in our homeland, and people will have a little Ahnidzor [village in Armenia where the writer was born] here, will be able to come here and communicate with the great master’s works and life. I will assist with everything to make this turn into a reality on time”, the President told reporters.

He said he wants the center-museum’s area to turn into a beautiful environment, and added that will assist the implementation of the project as much as he can.

During the tour Davit Matevosyan introduced the President on the complete design of the center-museum, as well as its activity goals. He told Armenpress that the Armenian President has been the old friend of Hrant Matevosyan. “They became friends when Armen Sarkissian was appointed Prime Minister of Armenia”, Davit Matevosyan said, adding that the President may visit Lori province, the birthplace of the renowned writer, in the future.

Davit Matevosyan said modern exhibitions will be held in the center-museum. He stated that the center-museum’s activity will be directed for spread and propaganda of not only Hrant Matevosyan’s literary heritage, but also the Armenian culture and literature.