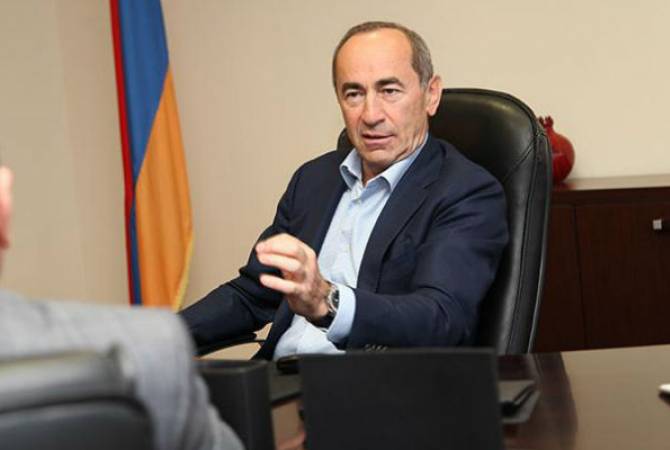 
YEREVAN, JULY 10, ARMENPRESS. Former President of Armenia Robert Kocharyan has given an interview to Yerevan Today about a meeting with the military command which he had on February 23 in 2008.

Yerevan Today asked the former president about the March 1 case, which is actively being probed currently.

“One of the most discussed facts is a consultation which you chaired with the military command. What was this consultation?” – Yerevan Today asked.

“No consultation as such had taken place. There was a brief, less than half an hour meeting with the commanding staff. I can tell you why I decided to chair this meeting.

Immediately after the elections I was in Moscow to participate in the CIS informal summit. The protests had only begun in the Freedom Square [Yerevan], while Ter-Petrosyan [former president], who had garnered 21,5% of the votes, declared himself to be the president-elect, despite the Central Electoral Commission’s preliminary results which proved Serzh Sargsyan’s victory. Since the evening of February 21, director of the national security service Gorik Hakobyan called me several times, reporting alarming news about what is happening in Yerevan. He told me that Ter-Petrosyan has declared himself to be the president-elect during the ongoing unauthorized rally and that he is saying that they should dismantle the state machine and that it is allegedly already breaking apart. The most concerning fact from all was that the protesters were attempting to draw the Yerkrapah [Volunteers Union] to their side, they were chanting “Manvel, Manvel” [Grigoryan] in the square. Meanwhile heavy discussions over this issue were underway for two days within the Yerkrapah.

Moreover, numerous high ranking military officials from the organization’s board were taking part in the discussions. President of the Board Manvel Grigoryan himself was the deputy minister of defense, with a Lt. general rank. At this time many members of the organization were gathered outside the building, lower ranked military, some of them armed. This was inadmissible. The Army was basically being dragged into the post-electoral political processes, which was a real danger for constitutional order. Urgent measures had to be taken, and I cut my visit short and returned to Yerevan already in the evening of February 22. Already at the airport I tasked to summon the military high command in the presidential palace in the morning of February 23. At the meeting I said that the army’s and generally the staff’s involvement in political processes is unacceptable and I demanded all acting and Yerkrapah member generals to make a decision – either quit the military or the Yerkrapah board. It is unacceptable when generals, instead of dealing with the army, for two days discuss the political stance of a semi-military structure.

Manvel Grigoryan didn’t show up to the meeting saying he is on a vacation. I instructed to report to him to go home and wait for a final decision regarding his fate. I also said that if until evening the assemblies and gatherings at the Yerkrapah don’t halt I will order arms and ammunition searches in the entire territory of the building and among those present – and at this evening the bulding was already empty, Manvel Grigoryan had complied and went home. I demanded the commanding staff to take measures to ensuring law and order in the military and refrain it from political processes. Moreover on the background of alarming information coming in from Karabakh about growing enemy activity along the line of contact. The conversation was strict and brief. There was no discussion, I said what I had to say and left.

Later during the day I held two other brief meetings with the commanding staff of the police and the national security service. The essence and the topic was the same. There was no discussion or development of any action plan during none of the meetings. It was important for me to strengthen law and order in the security structures, maintain their integrity and refrain them from influences of political parties,” Kocharyan said in the response as reported by his office.

Manvel Grigoryan is a Member of Parliament, a retired general who is currently behind bars pending trial on charges of illegal possession of firearms and ammunition, embezzlement and grand theft. The Yerkapah Union ousted Grigoryan as president after the charges were pressed.