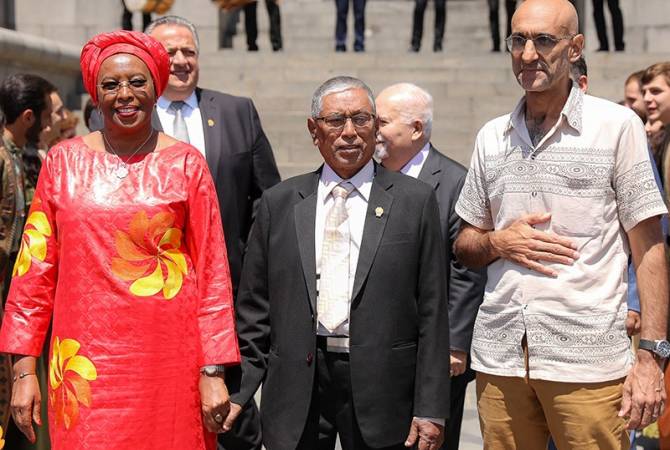 
YEREVAN, JUNE 13, ARMENPRESS. On June 10, 2018the name of 2018 Aurora Prize Laureate Kyaw Hla Aung was inscribed in the Chronicles of Aurora, a unique modern manuscript created in the 21st century and the first one created at the MesropMashtots Institute of Ancient Manuscripts (Matenadaran). Earlier that day Mr. Aung had been presented the 2018 Aurora Prize, granted by the Aurora Humanitarian Initiative on behalf of the survivors of the Armenian Genocide and in gratitude to their saviors, at a ceremony in the Ararat Valley near Khor Virap, Armenia, IDeA told ARMENPRESS.

Theinscription ceremony dedicated to the 2018 Aurora Prize Laureate Kyaw Hla Aung was attended by the Aurora Humanitarian Initiative Co-Founders Vartan Gregorian, Noubar Afeyan and Ruben Vardanyan, and all Aurora Prize Laureates, including Marguerite Barankitse and Doctor Tom Catena. One of the highlights of the event was the touching moment when Vartan Gregorian signed the title page of the Chronicles of Aurora previously signed by Mr. Afeyan and Mr. Vardanyan on April 24. The title page, signed by all three Co-Founders, will become an important part of the manuscript.

The guests were greeted by Aurora volunteers, gathered to honor the 2018 Aurora Prize Laureate.Aftertheofficial part the guests had a chance to see the show put up by the Armenian song and dance ensemble Karinand join the dancers performing the traditional Armenian Kochari dance.The audience also enjoyed a rhythmic piece by the Vahagn drummers ensemble.

Matenadaran is one of the world’s richest depositories of medieval manuscripts and books spanning subjects from history and philosophy to medicine. The manuscript will be safekept with more than 20,000 hand-written documents of great historical value being currently housed in Matenadaran, an important center for preserving Armenian heritage and humanitarian values. On April 24, 2019 the names of 2019 Aurora Humanitarians will be announced and added to the Chronicles of Aurora.

The Aurora Prize for Awakening Humanity is a global humanitarian award established to recognize modern day heroes and the exceptional impact their actions have made on preserving human life and advancing humanitarian causes in the face of adversity. On behalf of the survivors of the Armenian Genocide and in gratitude to their saviors, an Aurora Prize Laureate is being honored each year between 2015 and 2023 (in remembrance of the eight years of the Armenian Genocide 1915-1923) with a US$100,000 grant as well as the unique opportunity to continue the cycle of giving by nominating organizations that inspired their work for a US$1,000,000 award.