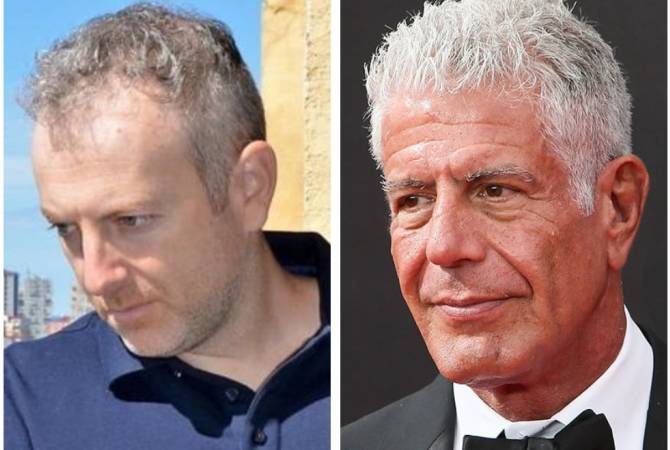 
YEREVAN, JUNE 8, ARMENPRESS. Russian-Israeli travel blogger Alexander Lapshin, the man who was under global media spotlight for his arrest and extradition to Azerbaijan for visiting Artsakh, claims that celebrity chef Anthony Bourdain’s death may somehow be connected with the latter’s visit and filming of CNN’s Parts Unknown in Artsakh.

Bourdain was officially blacklisted by Azerbaijan after filming the show in Artsakh. Azerbaijan declared Bourdain persona non grata in November of 2017. The world-renowned chef, bestselling author and multiple Emmy-winning television personality traveled to Armenia and Artsakh in October of 2017 and the episode aired in May of 2018. System Of A Down’s Serj Tankian, the Armenian-American rock star, was Bourdain’s guide during the visit. “Do you think this is connected somehow to his movie about Karabakh and Armenia? This man was widely criticized by Azerbaijan authorities because of that. Btw, just recently I have published the article in Le Monde called "Azerbaijani regime kidnaps and kills anyone it dislikes" and few days later this guy is gone by "suicide". Just short remind - they called an attempt of my murder in Baku prison as "suicide" as well) p.s Anton Nosik, the well known Russian journalist "suddenly" gone after his Karabakh visit as well, not to mention that Azerbaijan threatened him as well”, Lapshin said on Facebook after news on Bourdain’s death began emerging.

CNN confirmed Bourdain's death on Friday and said the cause of death was suicide. Bourdain was in France working on an upcoming episode of his award-winning CNN series, "Parts Unknown." His close friend Eric Ripert, the French chef, found Bourdain unresponsive in his hotel room Friday morning. Mr. Bourdain was found in his hotel room at Le Chambard, a luxury hotel in Kaysersberg, a village in the Alsace region of eastern France, according to a prosecutor in the nearby city of Colmar. The prosecutor, Christian de Rocquigny du Fayel, said the cause of death was hanging. “At this stage, we have no reason to suspect foul play,” he said. Mr. Bourdain had traveled to Strasbourg in France, near the country’s border with Germany, with a television production crew to record an episode of his show “Parts Unknown” on CNN, the network said. “It is with extraordinary sadness we can confirm the death of our friend and colleague,” CNN said in a statement.