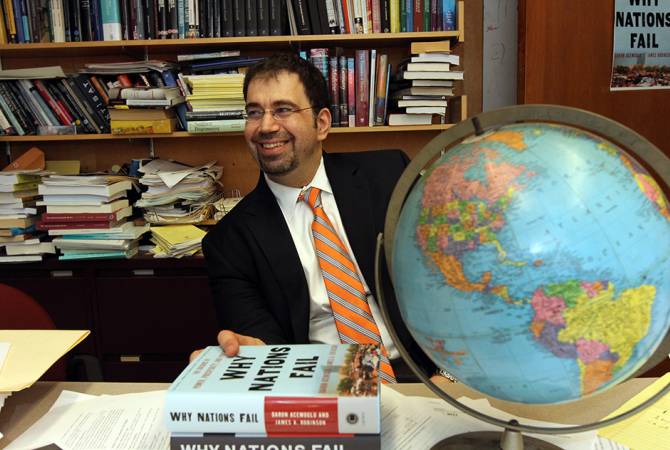 
YEREVAN, MAY 31, ARMENPRESS. Turkish-American economist Daron Acemoglu, the ethnic Armenian expert who was personally contacted by Prime Minister Nikol Pashinyan shortly after the May 8 election for assisting in restoring the country’s economy, says he believes that the main requirements for Armenia are to eradicate corruption, begin building the institutional pillars for future economic growth and do this all in conditions of domestic solidarity.

In an interview to Voice of America, Acemoglu argued that the peaceful revolution is a highly important, but only the first step for Armenia.

The second step, according to him, must be the implementation of systemic reforms based on this peaceful beginning – laying grounds for future prosperity.

“This second step isn’t guaranteed anyhow, however now at least we have the chance to realize it. There are no universal solutions, they depend on conditions in each given country,” he said.

Highlighting the enthusiasm of the international community about the changes in Armenia, Acemoglu however said that challenges are inevitable.

Acemoglu says that in the exciting atmosphere there is a desire to attempt to solve all issues at once, however in this case he says that the basis which ensures balanced approach isn’t created.

“The Armenian government must be supplemented with new young figures, at the same time the collapse of existing structures shouldn’t be allowed,” he stressed.

Acemoglu says he doesn’t see himself in the composition of the Armenian government, but he says he is willing to help.

“It’s not about building a bridge in order for an expert to come from abroad, to build and leave. The Armenian citizen should build his own country,” he said.

Earlier on May 13, five days after being elected Prime Minister of Armenia, Nikol Pashinyan said that he has phoned Daron Acemoglu, the acclaimed ethnic Armenian economist. Acemoglu was born to Armenian parents in Turkey and holds dual Turkish/US citizenship.  According to Pashinyan, the economist had said that he is ready to assist Armenia in restoring and developing the economy. “Mr. Acemoglu accepted my invitation to visit Armenia”, the PM had said.

Acemoglu has been teaching at the Massachusetts Institute of Technology (MIT) for many years. He is considered a global authority in modern economics.