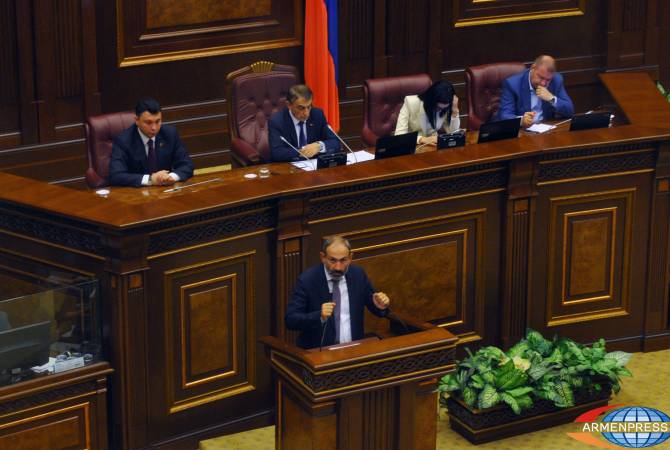 
YEREVAN, MAY 8, ARMENPRESS.  New Prime Minister of Armenia Nikol Pashinyan says he is planning to be briefed by the military and national security on the country’s security environment.

“We have proposals on all sectors, however this will be more specific after hearing all reports, and having the information more completely”, Pashinyan told reporters after being elected when asked about his primary steps.

“All these issues are under discussion. Disclosing names today isn’t appropriate. Yes, there are numerous candidates, we have professionals who must be involved in the administration sector. There will be significant changes in the government’s composition. By the way, when we are saying national solidarity and unity, this doesn’t mean that all of us think about everything the same way, our viewpoints are identical, while criticism is considered disruption of unity. Of course not. Taking into account the specificities of the current political situation, we must regulate this atmosphere,” Pashinyan said.

Speaking about upcoming plans, Pashinyan said he plans a reforms process of the electoral system and measures will definitely be taken in this direction.

Pashinyan also said the timing of snap elections is under discussion.

Asked which powers of the PM he is planning to reduce, Pashinyan noted that a super Prime ministerial system shouldn’t exist and he will work in this direction.

He said he will depart to Artsakh on May 9. He also mentioned that he will take part in the EEU summit soon. He expressed hope that a bilateral meeting with the Russian president will take place.

There are 4 factions in the Armenian parliament. The Republican Party (HHK) faction, the ruling party of Armenia, has 58 seats in the 105-seat unicameral parliament of Armenia – known as the National Assembly.  The ARF faction – (Armenian Revolutionary Federation aka Dashnaktsutyun), has 7 seats. The Tsarukyan faction has 31 seats, and the Yelk faction has 9 seats.