YEREVAN BESTSELLER 5/5 – Vazgen Sargsyan’s ‘What are you doing, guys?’ among weekly top 10 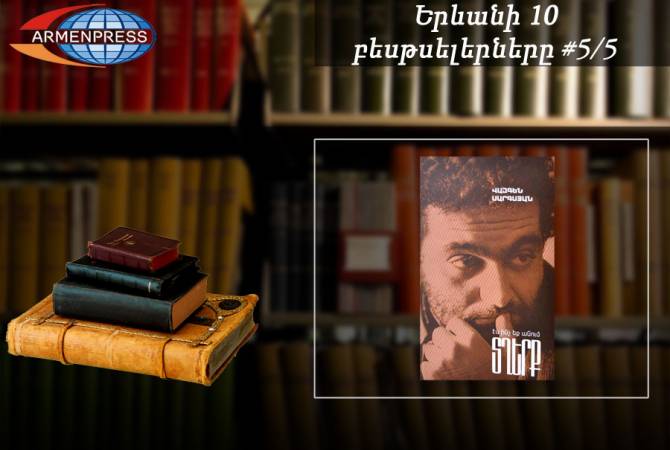 ‘The Alchemist’ by Brazilian writer Paulo Coelho is next. Originally written in Portuguese, it became an international bestseller translated into some 70 languages as of 2016. An allegorical novel, The Alchemist follows a young Andalusian shepherd in his journey to Egypt, after having a recurring dream of finding treasure there.

‘Animal Farm’ by George Orwell is 5th. Animal Farm is an allegorical and dystopian novel, published in Englandon 17 August 1945. According to Orwell, the book reflects events leading up to the Russian Revolution of 1917 and then on into the Stalin era in the Soviet Union. Orwell, a democratic socialist, was an outspoken critic of Joseph Stalin and, especially after experiences with the NKVD and the Spanish Civil War, he was actively opposed to the controversial ideology of Stalinism. The book is banned in China, North Korea, Burma and a number of Islamic countries.

Armen Niazyan’s ‘Hold my hand: I am afraid’ is ranked 6th. The book consists of three parts – stories, thoughts and poems the focus of which is the following: be careful towards human beings, not ignore them who need us.

‘Fahrenheit 451’ by Ray Bradbury is 7th. Fahrenheit 451 is a dystopian novel published in 1953. It is regarded as one of his best works. The novel presents a future American society where books are outlawed and "firemen" burn any that are found. The title refers to the temperature that Bradbury understood to be the autoignition point of paper.

Davit Samvelyan’s ‘Winter of Rodin’ is 8th in the bestselling list. It includes short stories and essays.

‘The Kite Runner’ by Afghan-American author Khaled Hosseini comes next. Published in 2003 by Riverhead Books, it tells the story of Amir, a young boy from the Wazir Akbar Khan district of Kabul, whose closest friend is Hassan, his father's young Hazara servant. The story is set against a backdrop of tumultuous events, from the fall of Afghanistan's monarchy through the Soviet military intervention, the exodus of refugees to Pakistan and the United States, and the rise of the Taliban regime.

‘Siddhartha’, a 1922 novel by Hermann Hesse that deals with the spiritual journey of self-discovery of a man named Siddhartha during the time of the Gautama Buddha, concludes this week’s bestselling list. The book, Hesse's ninth novel, was written in German, in a simple, lyrical style. It was published in the U.S. in 1951 and became influential during the 1960s. Hesse dedicated the first part of it to Romain Rolland and the second to Wilhelm Gundert, his cousin. The book has been translated by Ashot Alexanyan.