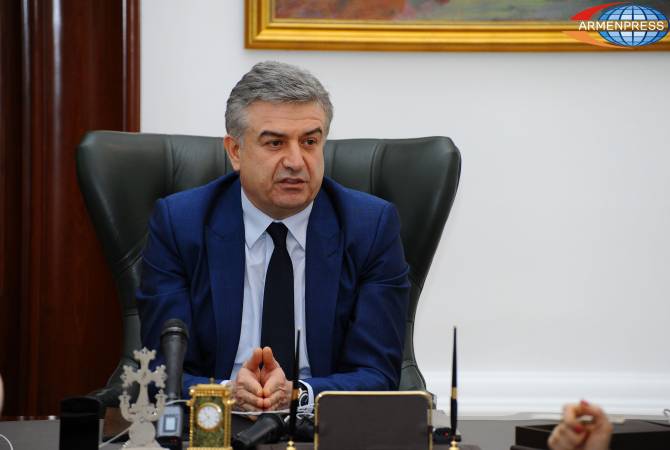 - Mr. Karapetyan, this morning you declined Nikol Pashinyan’s invitation for negotiations, assessing it as unpromising, considering that the agenda and the format is in the interest of just one side. What do you think, when will it be possible to hold meaningful negotiations?

- We have commented on that in our announcement and there are no changes in our position and I think the logic is quite obvious. Negotiations are meaningful in the case when the sides have the wish to listen to one another. Whether they will reach an agreement or no, they will be flexible as a negotiator or no is a process. But when it’s announced that this is the agenda and the other side has no right to bring his own agenda, this is not a negotiation, I do not even know how to call it.

- First of all, I do not know if Mr. Pashinyan has great experience as a negotiator, or no, but I have an interesting experience of negotiations. Moreover, my experience is in different cultural, religious, linguistic domains. And up till now I have never been defeated in negotiations. Being an orator, enjoying high reputation does not mean being a good negotiator. For that reason my answer was that.

- Look, I want everyone to hear me. He says my agenda is on the negotiation table and there is no other agenda, I am the only Prime Minister, or no one else is… We are speaking about democracy, pluralism, ability to listen to one another, tolerance, Constitution and a parliamentary country, but this is like a monopoly, monopoly of the political field. Afterwards he says I am the candidate of the Prime Minister. In reality I have very deep respect towards the citizens who express their distrust, disagreement and dissatisfaction and that everything goes on peacefully, thank God, and I hope it will continue the same way. We have to develop the political culture that one should listen to another. Now our citizens gathered in one place say that this person is our Prime Minister, others gathered somewhere else say the Prime Minister is that one. How will we chose who the PM is? For that there is a platform where the PM must present his program. I think Mr. Pashinyan has his program of what kind of country he wants to build, what targets he will outline in terms of security, foreign relations, economic growth, social, justice and so on. But it’s we who will choose the program. We do not elect a good, moral person with high reputation, but we choose the idea and I do not rule out that those fellow citizens who are dissatisfied with today’s policy, maybe all of them want him to be the PM, but maybe not. Maybe they are dissatisfied with today’s management, but if you give them an opportunity to choose between this or that person, his program and team, maybe it’s not Mr. Pashinyan. For that reason we say that the Constitution has regulated all that. Come to the National Assembly with your program, and if you have enough supporters you can become the Prime Minister. But I do not think we had wished to create a society where one could monopolize, saying I am the only Prime Minister, there is no other candidate, I dictate the agenda during the negotiations, you have no right to bring your agenda.

-And finally, these days it can often be heard that the authorities are not consolidated. To what extent do you share this opinion?

- What does it mean that the authorities are not consolidated? If saying authorities you mean government bodies, they function normally. But if you speak about the party, I think it’s consolidated.

- How do you see this consolidation against those opinions?

-Frankly speaking I do not know under what factors they say so.

-Because no one spoke about that before this movement.

- You know so much is said by the media, about my resignation, we deny it, again resignation. If we respond to all that, we may spend the whole day on that. But in reality I think the solution in this way. In reality we have a crisis, accumulated problems and we have to clearly decide which force or consolidation of forces will take the country to a better future. What kind of programs there are, because we will not elect an individual, we have to elect a team, we must have the ability to listen to one another and we have to be tolerant. We do not conceal that we have our share of guilt, maybe very large share for this intolerance, so much problems, but we have to overcome this situation by speaking to one another, accepting the mistakes and listening to other opinions. Nothing should be monopolized; it will not lead to good things.

16:31, 06.30.2022
1982 views Statements of Turkish officials that they coordinate the process with Azerbaijan are strange – Armenia’s Special Envoy