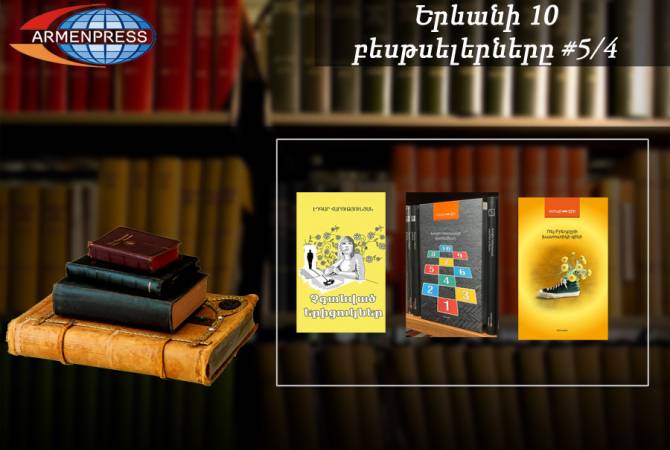 ‘Jonathan Livingston Seagull’ by American writer Richard Bach tops this week’s bestselling list. It is a fable in novella form about a seagull who is trying to learn about life and flight, and a homily about self-perfection. It was first published in 1970.

‘Hopscotch’ by Argentine writer Julio Cortázar is 4th. Written in Paris, it was published in Spanish in 1963 and in English in 1966. Hopscotch is a stream-of-consciousness novel which can be read according to two different sequences of chapters. This novel is often referred to as a counter-novel, as it was by Cortázar himself.

Armen Niazyan’s ‘Hold my hand: I am afraid’ is back to the list and captures the 5th place. The book consists of three parts – stories, thoughts and poems the focus of which is the following: be careful towards human beings, not ignore them who need us.

‘Fahrenheit 451’ by Ray Bradbury is 6th. Fahrenheit 451 is a dystopian novel published in 1953. It is regarded as one of his best works. The novel presents a future American society where books are outlawed and "firemen" burn any that are found. The title refers to the temperature that Bradbury understood to be the autoignition point of paper.

‘The Walk’ by Swiss writer Robert Walser is ranked 7 in the list. In 1955 the novel was translated into English by Christopher Middleton; it was the first English translation of his writing and the only one that would appear during his lifetime. The novel displays many of his writerly personas, among them the melancholic, the ironist, the romantic, and the high modernist. The Walk was originally published in 1917.

‘The Alchemist’ by Brazilian writer Paulo Coelho is next. Originally written in Portuguese, it became an international bestseller translated into some 70 languages as of 2016. An allegorical novel, The Alchemist follows a young Andalusian shepherd in his journey to Egypt, after having a recurring dream of finding treasure there.

‘Three Comrades’ by Erich Maria Remarque is ranked 9th.  It is written in first person by the main character Robert Lohkamp, whose somewhat disillusioned outlook on life is due to his horrifying experiences in the trenches of the First World War's French-German front.

‘Dandelion Wine’, 1957 novel by Ray Bradbury concludes this week’s list. The novel is taking place in the summer of 1928 in the fictional town of Green Town, Illinois, based upon Bradbury's childhood home of Waukegan, Illinois. It was translated from English by Zaven Boyadjyan.