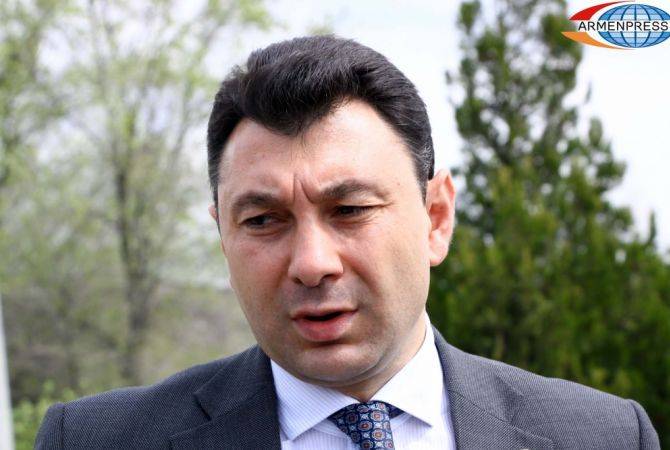 “Once again Serzh Sargsyan has proved that he is an exceptional state official, exceptional and irreplaceable statesman. Not every man could’ve had such courage, such patriotism. And I once again am proud to have had the honor to work under his leadership, in his team. He displayed exceptional patriotism and strength,” Sharmazanov said.

Reporters asked the Vice Speaker who the ruling party’s candidate for Prime Minister is, but Sharmazanov refused to answer, stressing that they’ve agreed to remain silent about political affairs on April 24 – the Armenian Genocide commemoration day.

“Life continues, tomorrow is April 25, tomorrow I will answer all of your political questions”, he said.

Street demonstrations and protests began in Yerevan 12 days ago, days before Armenia’s third President Serzh Sargsyan was elected by Members of Parliament to serve as Prime Minister. The historic vote – first time that a PM was elected by parliament in Armenia – took place April 17.

Earlier on April 9, the country shifted to a parliamentary system of administration. On the same day, President Armen Sarkissian took office.

Opposition protests began in the Armenian capital in the form of sit-ins, marches and demonstrations.

Led by opposition MP Nikol Pashinyan, the lawmaker from the parliamentary Yelk faction which has only 9 seats in the 105-seat Armenian Parliament, the protesters launched a campaign of civil disobedience.

On April 14, the crowd sporadically charged onto the Public Radio HQ in Yerevan, breaching into the building and demanding airtime. The demand was refused and the crowd subsequently left. Protesters even intruded into educational institutions, calling for student strikes.

In the following days opposition MP Nikol Pashinyan called on his supporters to paralyze the functioning of the government by blocking not only streets and major intersections, but also governmental facilities and ministries. Protesters were seen deflating the tires of official vehicles outside ministry headquarters.

Police numerously called on the protesters to maintain public order and adhere to the law.

At one point protesters had even blocked the official vehicle of the country’s defense minister, while he was on-duty.

Many were detained in the course of events as mass public disturbances were reported.

The demonstrators would gather every evening in the Republic Square of Yerevan, where Nikol Pashinyan would address his supporters, calling for renewed demonstrations.

On April 16, a brief clash erupted between riot police and the protesters in Baghramyan Avenue – which houses major governmental buildings.  Nikol Pashinyan suffered a minor injury to his hand after contacting a barbed wire. Several people were hospitalized, including three police officers.

Police declared they are entitled to disperse the rally under the Constitution, because the demonstrations are causing public disturbances and restricting the fundamental rights of others, namely the freedom of movement, and also endangering public safety.

The protesters failed to comply with police orders and resumed demonstrations.

On April 21, Pashinyan reacted to the President’s call, offering to meet in their main rally site – the Republic Square. The President accepted the offer and was seen approaching the heavily overcrowded square shortly afterwards. President Sarkissian walked through hundreds ot protesters, surrounded by few bodyguards, and began talking with the MP. Although the meeting was broadcast by media, the conversation wasn’t heard because no microphones were allowed near. At one point the President took off his tie, seemingly signaling that it is an informal meeting.  The meeting lasted around 10-15 minutes, and the President left the area, waiving and greeting the people.  The President then met with Prime Minister Serzh Sargsyan.

Shortly afterwards, it was reported that the Prime Minister and the opposition leader will meet the next day, April 22, in the Marriott Hotel in Republic Square.

Prime Minister Serzh Sargsyan arrived wearing a suit without a tie, while MP Nikol Pashinyan was wearing a camouflage t-shirt and a hat. The tense meeting lasted only 3 minutes, as the lawmaker said he will only discuss the resignation of the Prime Minister, to which Sargsyan responded by slamming it as “blackmailing the state”. The Prime Minister told the lawmaker that if he and his followers to don’t return to a legal framework the entire responsibility will fall Pashinyan.

After the meeting the opposition leader once again went out on the streets, calling for marches and demonstrations.

A few hours later,  police dispersed a rally in the city’s Erebuni district, and three initiators of the rally, the opposition leader himself, and two other lawmakers - Ararat Mirzoyan and Sasun Michaelyan were detained.

After a couple of hours the Prosecutor General’s Office said that the three lawmakers have been placed under arrest under Article 96, Paragraph 2 of the Constitution within the framework of an ongoing criminal case with the purpose of preventing crime and in direct suspicion of deliberately organizing and holding illegal rallies.

Their followers implemented the unlawful calls and blocked numerous streets and avenues, blocked the entries of state, self-governing body buildings, as well as private organizations, obstructed the normal functioning of these buildings and agencies, committed violence against police officers and others – leading to disproportionate restriction of the rights of other citizens and public interest.

As required by the Constitution, the Speaker of Parliament has been immediately notified on the arrest of the lawmakers”, the Prosecutor General’s Office said in a statement.

The crowd did not disperse, and pocket demonstrations were reported citywide.

Later in the day, hundreds of protesters gathered in the Republic Square again.

On April 23, First Deputy Prime Minister Karen Karapetyan said he has asked the prosecution to retract the motion against the lawmakers.

“Today we’ve made a decision and I have addressed the Prosecutor General to retract the motion regarding the Members of Parliament. I am now going to meet with Mr. Pashinyan in order to negotiate and find a solution. Tomorrow’s day is very important, and I believe that we will have enough common sense and soberness to show the whole world that regardless of how many difficult problems we have, regardless of how many unsolved issues we have, we can sit and find a reasonable solution,” Karapetyan said.

Later at about 16:00, Prime Minister Serzh Sargsyan stunned the country by announcing that he is stepping down from office.

I am addressing all citizens of the Republic of Armenia

The elderly and my dearest youth,

I am addressing those who stood on the streets day and night with “Reject Serzh” calls and those who were reaching their offices with difficulty and carrying out their duty without complaining,

I am addressing my fellow party-men, all political forces and politicians,

I am addressing you for the last time as leader of the country.

Nikol Pashinyan was right. I was wrong. The situation has several solutions, but I will not take any of them. That is not mine. I am leaving office of the country’s leader, of Prime Minister.

The street movement is against my tenure. I am fulfilling your demand.

Peace, harmony and reasoning for our country.

Thank you”, he said.

Later the government held an emergency meeting, and the Cabinet noted that Sargsyan is considered incapacitated from fulfilling his duties based on his own statement, thus, under the legislation the First Deputy Prime Minister steps in as acting PM.