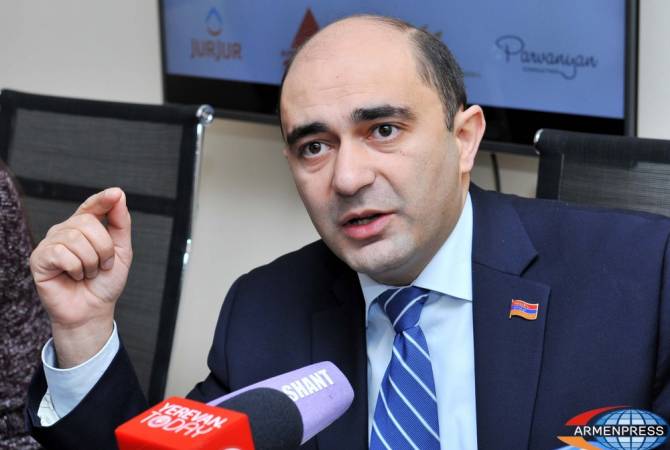 
YEREVAN, APRIL 22, ARMENPRESS. Opposition lawmaker from the Yelk faction, chairman of Bright Armenia party Edmon Marukyan was quick to weigh in on the Sargsyan-Pashinyan meeting, calling it historic and significant.

Marukyan released a video message, asking the parties to think about options to hold another meeting.

The lawmaker stressed that everything must be done to avoid irreversible consequences.

All other forces of the Yelk faction are not endorsing the ongoing struggle of Mr. Pashinyan.

“I was following the historic meeting of Serzh Sargsyan and Nikol Pashinyan. I believe that we have a serious achievements, this meeting was very important. And I have one request, that Mr. Sargsyan, and Mr. Pashinyan rest for an hour, think, think options and meet again, to discuss.

Your meeting was very important, I repeat, this was a historic meeting. I am asking you Mr. Sargsyan, Mr. Pashinyan, my good friend, I am asking you to once again find an opportunity, speak and discuss options. I made a call yesterday also, and we must do everything to avoid irreversible consequences,” Marukyan said.

He added that he is now on his way to Strasbourg for the sitting of PACE, where according to him clearly the number once topic will be the ongoing situation in Armenia.

“It is obvious that the development of the situation and events will be very bad if you don’t meet again”, he said.

“The maximalist approaches of both sides should be lowered a bit, and a third way must be discussed. I am asking you”, he said.

The meeting between Armenia’s Prime Minister and opposition MP Nikol Pashinyan, leader of the ongoing demonstrations, lasted only a few minutes Sunday morning.

The meeting took place in the Marriott Hotel in Republic Square of Yerevan, the main rally site where every evening demonstrators gather to protest.

The Prime Minister arrived without a tie, while the opposition MP was wearing his usual t-shirt and hat.

As expected, both the Prime Minister and the lawmaker arrived at the hotel at 10:00.

The meeting was held in the presence of numerous reporters who were broadcasting live.

“I am happy that you responded to my numerous calls to talk. Although I don’t quite imagine how long we can negotiate in the presence of dozens of reporters, nevertheless I am happy”, the Prime Minister said at the beginning.

MP Nikol Pashinyan responded by saying that there is a misunderstanding and that he has come to discuss the PM’s resignation and peaceful transfer of power, rather than for dialogue.

“That’s not negotiations, that’s not a dialogue. That is simply an ultimatum, blackmailing the state and legitimate authorities. You do not realize the degree of responsibility, you didn’t learn lessons from March 1 [2008]. And if we have to speak in that tone, then I am only left to once again advice you to return to the legal area and overall the limits of reasonable actions. Otherwise the entire responsibility falls on you,” Prime Minister Serzh Sargsyan said.

Pashinyan reacted by saying that the situation in Armenia has changed and the power has transitioned to the people.

“A 7-8% parliamentary faction doesn’t have the right to speak on behalf of the people. And I don’t want to continue this conveersaton with you anymore. If you do not accept the lawful demand of the state, goodbye,” PM Sargsyan said and walked out on the opposition lawmaker.

Before departing, the Prime Minister addressed reporters, saying : “Dear reporters, you yourselves can make conclusions”.