Turkey to hold historical snap elections: why that decision was made and what to expect from elections? | ARMENPRESS Armenian News Agency

Turkey to hold historical snap elections: why that decision was made and what to expect from elections? 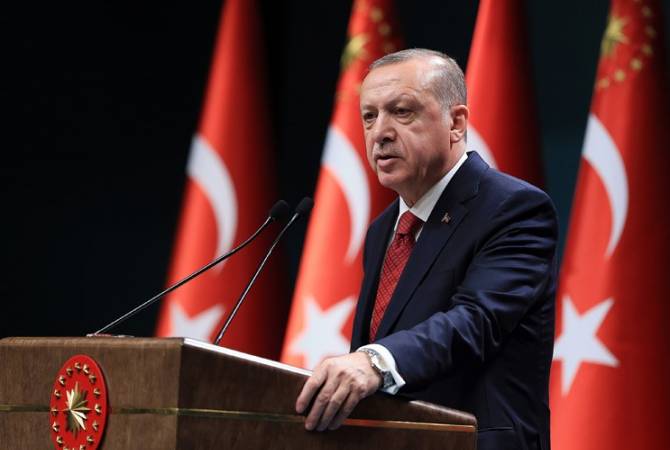 
YEREVAN, APRIL 19, ARMENPRESS. Turkish President Recep Tayyip Erdogan, leader of the ruling Justice and Development Party, on April 18 announced holding snap presidential and parliamentary elections in the country on June 24. This statement came after the meeting with the leader of the Nationalist Movement party Devlet Bahceli. In fact, June 24 outlines the beginning of a new historical era in the country full of dangerous elements of turning Turkey into an authoritarian state.

Why a decision was made to hold snap elections?

Initially, the presidential and parliamentary elections in Turkey were scheduled in November 2019. Nevertheless, the country’s leadership announced on April 18 that they will hold snap elections on June 24. By making this announcement at the Presidential Palace, Erdogan touched upon its reasons. In particular, he stated that the ongoing developments in Syria and Iraq, the fight against the Islamic State terrorist group and Kurdish militants made Turkey’s transition to a presidential system as a necessary imperative, “as a way to overcome the current uncertainty”. “Although the works between the president and the government do not create any problem, the diseases of the previous system already emerge everywhere. In order to be able to more strongly adopt and implement the decisions on Turkey’s future, the transition to a new system became an urgent necessity”, Erdogan said in his remarks. And the transition to a new governance system is possible only after holding the next elections.

Nevertheless, there are other reasons as well on holding snap elections. First of all it’s worth to mention the country’s economic situation: many economists were stating that in recent years Turkey’s economy has become very vulnerable. The evidence of this is the depreciation of the Turkish lira against dollar and Euro, as well as the double-digit inflation. Bad economic indicators, of course, should have negatively affected the reputation of the ruling party. Therefore, Erdogan decided to avoid from risks and hold snap elections.

It’s worth to note that by such decision Erdogan also deprives the country’s opposition from the opportunity to properly prepare for and participate in the elections.

Moreover, the upcoming elections are going to be held in the conditions of the state of emergency declared in the country since summer of 2016 which supposes that during the election campaign restrictions, violations of freedom of speech are expected by the state which will create unfair and unequal conditions for the political forces.

Turkey will make a historical transition to a presidential system

The June elections must be considered as historic since based on their results the most serious political change in the country since the establishment of the republic in 1923 will happen – the country will transition from the parliamentary system to the presidential one. This transition was enshrined by the constitutional referendum held in Turkey in April 2017.

The new constitution concentrates the country’s key government levers in the hands of the president. In particular, after the constitutional amendments, the Turkish president has a power to appoint and fire ministers, judges and prosecutors, as well as declare state of emergency in the country and etc.

These new provisions of the constitution were expected to come into force after the elections scheduled on November 3, 2019, but as it seems, they will come into force earlier than expected.

Moreover, Erdogan can be nominated for the president two more times remaining in office until 2028.

Although the ruling political force insisted that the transition to the presidential system will make Turkey more strong and secure, it’s obvious that these constitutional amendments aimed at concentrating broader powers in the hands of one person, in this case, Erdogan by making his actions more out of control and strengthening the already existing authoritarian regime in the country.

During the upcoming elections the ruling party will cooperate with the nationalists. Although it is expected that the political forces will separately participate in the parliamentary elections, they have one candidate for the president, that is incumbent president Recep Tayyip Erdogan. Leader of the Nationalist Movement party Bahceli already voiced their support for Erdogan in the elections.

Three political forces acting as opponents to the ruling party and the nationalist party are the followings: The Republican People’s Party, the pro-Kurdish Peoples’ Democratic Party and the new Good party.

The Republican People’s Party in recent years acts as the main opposition party in the country. The party has the most parliamentary mandates after the ruling ADP. The coming days will show whether its leader Kemal Kilicdaroglu will be nominated for the president or not, but it’s obvious that the party leader will not have real chances for victory.

The parliamentary elections do not promise easy holding for the pro-Kurdish Peoples’ Democratic party. Many of its members, including MPs, as well as mayors and village heads are being persecuted and arrested in the past 1.5 year. Although their participation in the parliamentary elections cannot be questioned, it’s difficult to believe that it can have more parliamentary mandates than in the previous 2015 elections (59 MPs). As for the presidential elections, it’s difficult to imagine any other candidate than its leader Selahettin Demirtash who is currently in jail.

The Good party, which has been formed in October, 2017, promises to make surprises in the coming elections. Its leader is former interior minister, former member of the Nationalist Movement party Meral Aksener who is expected to be Erdogan’s main opponent in the presidential election. She will be the first woman candidate to compete against Erdogan.

The results of polls conducted so far highlight the possibility of showing serious competition with Erdogan. However, the party can face some problems in terms of participation in the parliamentary elections. According to the Electoral Code, the party can participate in the parliamentary elections if it held its first party congress at least 6 months before the elections and has party offices in more than half of the 81 provinces of the country. Aksener said they met these requirements as they held the first congress on December 10, 2017 and have offices in 68 provinces.

To sum up, the presidential and parliamentary elections in Turkey aim at establishing new rules in the country which, in fact, will further strengthen the absolute power of Erdogan and his ruling force by silencing the alternative voices and further reinforcing the “man-state” slogan in the country.