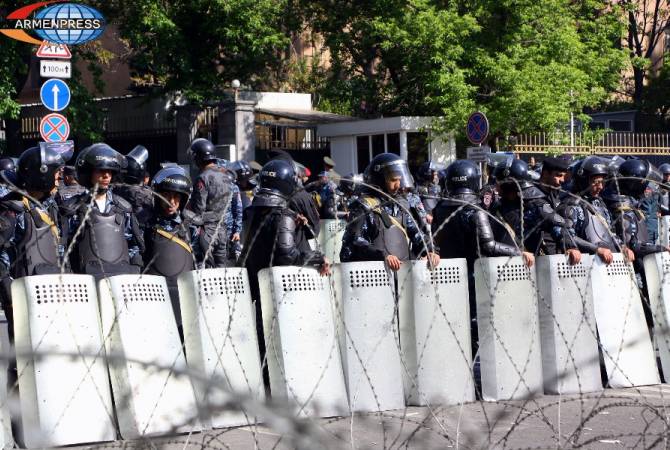 
YEREVAN, APRIL 17, ARMENPRESS. The Police of Armenia released a statement saying the actions of opposition MP Nikol Pashinyan and his supporters of entering governmental buildings and attempting to block or obstruct their functioning contain criminally liable features.

The crowd of demonstrators attempted to enter various ministry headquarters and other governmental buildings earlier in the day, in an attempt to obstruct the normal functioning of the agencies.

Police said they will take all legitimate measures as required by the situation to ensure the normal operations of state agencies and to protect the rights and lawful interests of people who are fulfilling their duties in those agencies.

Earlier on April 17, opposition MP Nikol Pashinyan called on his crowd of supporters to blockade governmental buildings, ministries and other state agencies and to obstruct their functioning.

Police said they have all lawful grounds, in accordance to the Constitution and law, to not only disperse the rally, but also prevent criminal actions, moreover when the protesters have been notified about a decision to cease the rally.

Police also notified that reports about large-scale operations, a revolutionary situation, tension or instability in various provinces and cities are absolute disinformation.