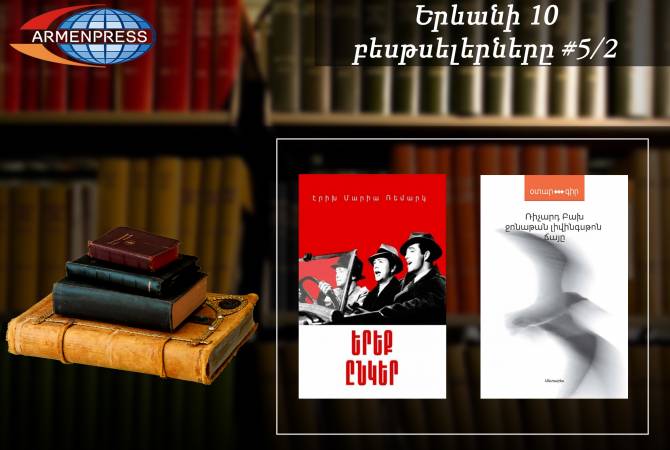 Armenian writer Mark Aren’s Where Wild Roses Bloom comes next in the ranking.

Armenian writer Edgar Kostandyan’s Ordinary Country is third, followed by Hold My Hand, I Am Scared – a novel by another Armenian author Armen Niazyan.

Three Comrades  by Erich Maria Remarque is 5th.  It is written in first person by the main character Robert Lohkamp, whose somewhat disillusioned outlook on life is due to his horrifying experiences in the trenches of the First World War's French-German front.

Jonathan Livingston Seagull by American writer Richard Bach is ranked 6th this week. It is a fable in novella form about a seagull who is trying to learn about life and flight, and a homily about self-perfection. It was first published in 1970.

The Fault in Our Stars by John Green, published in January 2012, is 7th. The title is inspired by Act 1, Scene 2 of Shakespeare's play Julius Caesar, in which the nobleman Cassius says to Brutus: "The fault, dear Brutus, is not in our stars, / But in ourselves, that we are underlings."

One Hundred Years of Solitude, the landmark 1967 novel by Colombian author Gabriel García Márquez that tells the multi-generational story of the Buendía family, whose patriarch, José Arcadio Buendía, founds the town of Macondo, a fictitious town in the country of Colombia, is ranked 8th in the bestseller list . One Hundred Years of Solitude has been translated into 37 languages and has sold more than 30 million copies.

Fahrenheit 451, a dystopian novel by American writer Ray Bradbury, published in 1953, concludes the top 10 list.  It is regarded as one of his best works .The novel presents a future American society where books are outlawed and "firemen" burn any that are found. The book's tagline explains the title: "Fahrenheit 451 – the temperature at which book paper catches fire, and burns..."