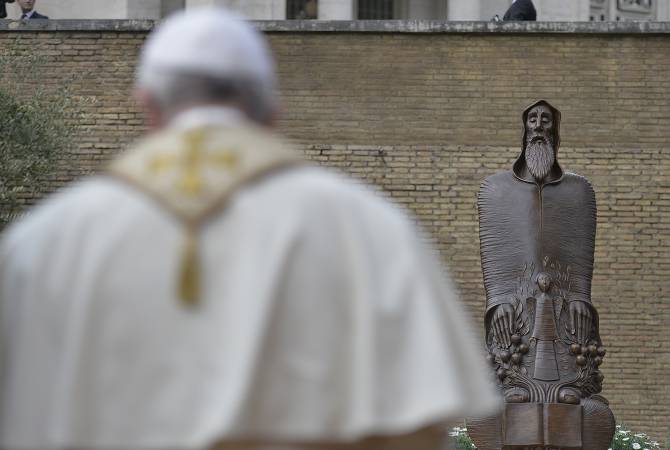 
VATICAN, APRIL 5, ARMENPRESS. The highly anticipated inauguration of the St. Gregory of Narek statue took place in the gardens of Vatican today.

The inauguration was marked with Pope Francis’ blessing of the statue.

Armenian President Serzh Sargsyan and numerous guests were in attendance of the ceremony.

After the blessing ceremony, Catholicos of All Armenians Garegin II and Catholicos of the Great House of Cilicia Aram I delivered prayers.

At the end of the ceremony Pope Francis bowed before the statue of St. Gregory of Narek.

The inauguration comes three years after Pope Francis proclaimed the Armenian saint Doctor of The Church during a mass dedicated to the Armenian Genocide centennial in the St. Peter’s Basilica in Vatican – again in April.

The statue symbolizes the high level of relations between the Catholic and Armenian Apostolic Churches, relations which were strengthened even more by the Papal visit to Armenia in 2016.

The story behind the idea of erecting the statue of Gregory of Narek in Vatican goes back to the Papal visit to Armenia two years ago, when the Armenian President gave a small statue of the Armenian saint to the Pope as a gift, and said he hopes to see the bigger version of the statue in Vatican someday. The Pope liked the statue and gave his approval.

The sculptor of the statue is Davit Yerevantsi.

Davit Yerevantsi is one of the renowned contemporary Armenian artists. Born in 1940 in Yerevan, he relocated to Paris in 1974.

Saint Gregory of Narek was a Christian mystic, Vardapet and Bishop of the Armenian Church. He was born in 951 and was educated in the Monastery of Narek. Gregory later became a teacher at the Monastery, and his fame as a Christian scholar was renown. His "Prayerbook of Lamentations", written in 1003, has also been known by the title of each of the 95 chapters in it: "Speaking with God from the Depths of the Heart". For ten centuries, the prayerbook has been one of the most often read and respected book among Armenians, second only to the Holy Bible. The book also has miraculous power attributed to it, and is frequently read over those who are ill.

Pope Francis proclaimed St. Gregory of Narek Doctor of the Church in 2015.