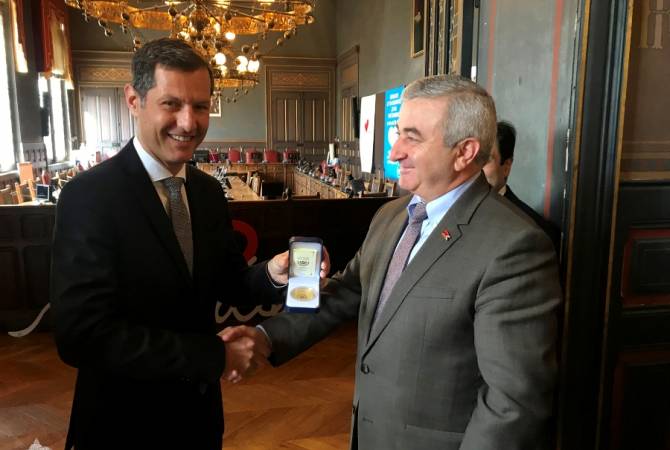 
YEREVAN, APRIL 3, ARMENPRESS. The delegation led by the Speaker of the National Assembly of Artsakh Ashot Ghoulyan paid a working visit to France on April 3 which kicked off at the municipality of Bourg-lès-Valence city of Drôme region.

As ARMENPRESS was informed from the press service of Artsakh’s parliament, the delegation was received by Bourg-lès-Valence Mayor Marlene Mourier. Thanking for the reception, Ashot Ghoulyan noted that the cooperation between the cities of Artsakh and France is constant and Bourg-lès-Valence is a successful example of cooperation in the humanitarian sphere.

Marlene Mourier highlighted direct interactions and emphasized that they are trying to strengthen the cooperation by the implementation of concrete projects. They have organized a fair of goods produced in Artsakh and particularly in Shushi in Bourg-lès-Valence.

Afterwards, the members of the delegation met with Valance Mayor Nicolas Daragon. The French Mayor greeted the guests, expressing readiness to deepen cooperation in the format of sister cities. Ashot Ghoulyan thanked for the reception and emphasized the friendly relations with the cities of France are highly valued in Artsakh.