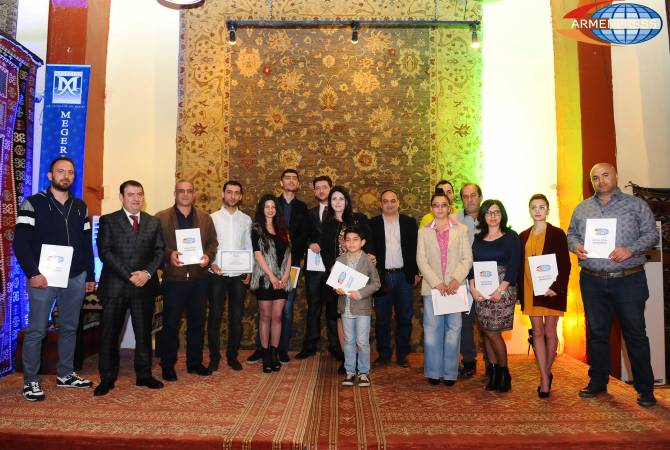 
YEREVAN, APRIL 3, ARMENPRESS. Yerevan Bestseller – an exclusive project of ARMENPRESS news agency, on April 3 summed up the results of the awarding ceremony of the most demanded books in 2016-2017 at the Megerian Carpet.

“When the project was created, our secret dream was that it would help both the reader, the publisher and the writer as we believe that the media outlets today and always must be with literature, book: books need constant care and attention”, Aram Ananyan – Director of ARMENPRESS state news agency, said, expressing hope to improve the project methodologically. “Now we are discussing this issue with publishing houses and bookstores so that we will be able to spread a good book with more predictable, interesting methodology in the coming years and bring the reader back to the book”, Aram Ananyan added.

Writer and photographer Edgar Harutyunyan received prize in the "Author of the best-selling works" nomination for his books titled ‘Art of Devotion or Ode to the Rose’ and ‘Unfound Chamomiles’.

“I will not hide that the success of sales of my books from the very start depended on the fact that I am a photographer and have great number of followers. I always tell those, who speculate this fact, that if I produced a washing powder, it would be hardly consumed with the same success. I think I wrote books which describe situations familiar to young girls”, Edgar Harutyunyan noted.

Irish novelist John Boyne’s ‘The Boy in the Striped Pyjamas’ was named the “Most demanded translation” at the Yerevan Bestseller award. The prize was handed over to translator Ruzan Azizyan for the Armenian translation of the book.

Mher Israyelyan was awarded with the Special Prize after Levon Ananyan for the book titled ‘A dog fortune on an old Armenian road’.

“People like my collection of stories. While writing I want to write my emotions, feelings on the paper by making them the readers’ property”, the writer said.

Narek Galstyan was awarded with the "Beginner" prize for ‘Akhparner’ (meaning brothers in Western Armenian) book.

Mark Aren received prize in the “Armenian author writing in foreign language” nomination for his books ‘Where Wild Roses Bloom’ and ‘Ville-Évrard’.

"Retrospective special prize" was awarded to the Darak publishing house for Vardges Petrosyan’s ‘Years Lived and Not Lived’ book.

Editor-in-chief of the publishing house Arkmenik Nikoghosyan said over the past years the best books are being published thanks to the active work of several publishing houses, and both the reader and the quality of book benefit from this.

"Special Prize of Jury" was handed over to Zangak publishing house for ‘Brave New World’ book by Aldous Huxley.

Artur Mesropyan, coordinator of translation programs at Zangak publishing house, said the awards are important, and he is happy that ARMENPRESS news agency organizes this event since both the publisher, the book are being appreciated, and the reader once again gets acquainted with the works done by publishing houses, as well as new books. “It would be better for such awarding ceremonies to be a lot. They promote our work”, he said and thanked ARMENPRESS for holding this event.