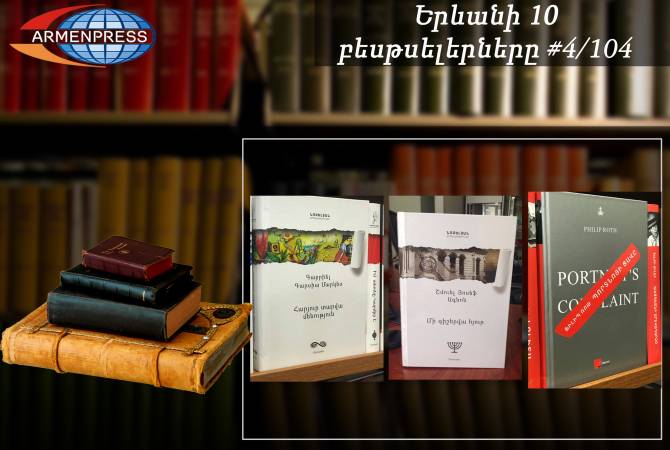 One Hundred Years of Solitude, the landmark 1967 novel by Colombian author Gabriel García Márquez that tells the multi-generational story of the Buendía family, whose patriarch, José Arcadio Buendía, founds the town of Macondo, a fictitious town in the country of Colombia, is the bestseller in Yerevan this week.  One Hundred Years of Solitude has been translated into 37 languages and has sold more than 30 million copies.

The second spot goes to Portnoy's Complaint, a 1969 American novel that turned its author Philip Roth into a major celebrity, sparking a storm of controversy. The novel tells the humorous monologue of "a lust-ridden, mother-addicted young Jewish bachelor," who confesses to his psychoanalyst in "intimate, shameful detail, and coarse, abusive language.”

A Guest for the Night by Nobel Prize laureate writer Shmuel Yosef Agnon comes next. The novel is Agnon's depiction of how all modern movements aside from Zionism secularism, Haskalah, socialism, communism failed to provide a viable alternative to traditional life.

The Walk by Swiss writer Robert Walser is 5th. In 1955 the novel was translated into English by Christopher Middleton; it was the first English translation of his writing and the only one that would appear during his lifetime. The novel displays many of his writerly personas, among them the melancholic, the ironist, the romantic, and the high modernist. The Walk was originally published in 1917

Hopscotch  by Argentine writer Julio Cortázar comes next. Written in Paris, it was published in Spanish in 1963 and in English in 1966. Hopscotch is a stream-of-consciousness novel which can be read according to two different sequences of chapters. This novel is often referred to as a counter-novel, as it was by Cortázar himself.

Stefan Zweig’s Collected Stories is ranked 8th. Zweig was an Austrian novelist, playwright, journalist and biographer. At the height of his literary career, in the 1920s and 1930s, he was one of the most popular writers in the world.

Armenian writer Narine Abgaryan's Three Apples Fell From The Sky is 9th in the list. The story evolves around a mountainous village and its residents.

The Alchemist by Brazilian author Paulo Coelho rounds up the top 10 this week. It was first published in 1988. Originally written in Portuguese, it became an international bestseller translated into some 70 languages as of 2016. An allegorical novel, The Alchemist follows a young Andalusian shepherd in his journey to the pyramids of Egypt, after having a recurring dream of finding treasure there.

Over the years there have been film and theatrical adaptations of the work and musical interpretations of it.