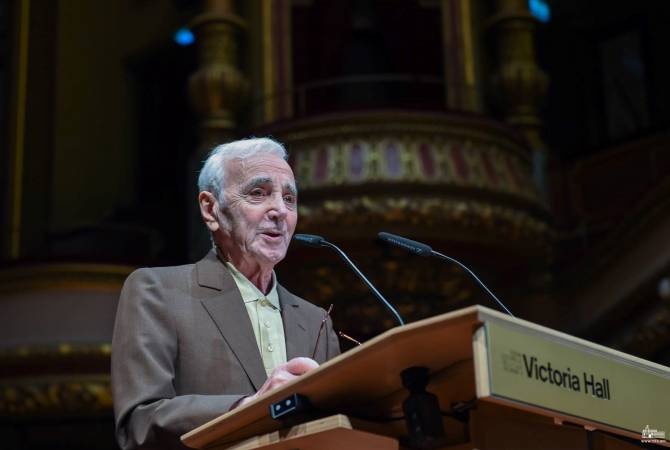 
YEREVAN, MARCH 23, ARMENPRESS. UN Special, a magazine issued by the Geneva office of the United Nations, published an interview with acclaimed singer Charles Aznavour, Armenia’s Ambassador to Switzerland, Permanent Representative, in its March issue. The interview is titled An extraordinary evening at Victoria hall and is dedicated to the concert organized by the Armenian Embassy in Switzerland on November 24, 2017, on the occasion of the 25th anniversary of establishment of diplomatic ties between Armenia and Switzerland, the ministry of foreign affairs said.

ARMENPRESS presents the interview as reported by the UN Special on the official website:

“It wasn’t an ordinary evening at the Victoria Hall in Geneva. There were warm words from the Swiss officials and the Director-General of UNOG, all to commemorate the 25th anniversary of Armenia becoming a United Nations member and establishing diplomatic relations with Switzerland.

But all eyes were on one man – a singer, songwriter, star on the Hollywood Walk of Fame, diplomat and who they say is the most famous Armenian of his time. The Ambassador of Armenia to the United Nations in Geneva and to Switzerland is no ordinary person; he is a living legend; he is Charles Aznavour. UN Special had a rare opportunity to sit down with Ambassador Aznavour and learn more about his path to diplomacy and the role and relationship of Armenia with the United Nations and Switzerland.

Thank you for agreeing to give us this interview, Ambassador. You are a recognised global celebrity, but not many people know about you also being the Ambassador of Armenia to the United Nations in Geneva and to Switzerland. How did that come about?

I was born in Paris, but both my parents were survivors of the genocide. My father, Misha, was an Armenian from Georgia; my mother, Knar, from a family of Armenian traders from Turkey. France quickly became my country. At home we spoke both Armenian and French, and we felt both 100% French and 100% Armenian. Many Armenians in France believe that I played a certain role in the term “Armenian” being included in the French national narrative, and then, after the song “They Fell,” which I wrote in 1975, they regarded me as someone who, finally, represented them.

However, my commitment to Armenia is relatively recent. Before its independence, I went there once, in 1964, just for a concert. It was the devastating earthquake of 1988 that alerted my consciousness. In twenty-four hours, I decided to launch an association: “Aznavour for Armenia”, which for many Armenians in Armenia in those difficult times, embodied hope for the future.

The newly independent Republic of Armenia trusted me with a function that would strengthen and formalise my commitment. First, I was appointed as Armenia’s Ambassador to UNESCO, and then, in 2009, President Sargsyan, who granted me the Armenian nationality, proposed that I represent Armenia in Switzerland and the United Nations in Geneva. At first I hesitated, thinking it would not be easy. Then I thought what is important for Armenia must be important for all of us.

Armenia is a country with ancient history and culture, but its independence is recent. What has the contribution of Armenia to the United Nations family been since its independence?

For Armenians, with a history of millennia, the last quarter of the century was particularly critical. Last year, Armenia celebrated the 25th anniversary of its membership of the United Nations. Over the past years, despite a number of challenges, Armenia has become a fully-fledged and responsible member of the international community. On becoming a member of the United Nations, Armenia committed to making its own contribution to the efforts of the international community aimed at building a peaceful future based on universal values, including respect for the principles of equal rights and the self-determination of peoples. It is important to emphasize the participation of Armenia in a number of United Nations peacekeeping missions: from Afghanistan to Iraq, from Kosovo to Lebanon and Mali, through which Armenia contributes to the establishment of international peace and security.

Armenia is committed to contributing to the joint efforts of the international community aimed at combating terrorism and responding to the refugee crisis. Armenia is the third country in Europe in terms of hosting the largest number of refugees per capita. Twenty-two thousand refugees from Syria have found shelter in Armenia.

Since it became a member of the United Nations, Armenia has been actively engaged in the activities of the Organization and its bodies in various areas. This, in particular, relates to our commitment to the United Nations prevention agenda. In this regard, the efforts of Armenia directed towards the prevention and punishment of the crime of genocide are essential. As a nation which has survived the horror of a genocide, we feel moral responsibility to voice the importance of the prevention of genocide and crimes against humanity and to take action in this domain.

An international day of commemoration and dignity for the victims of the crime of genocide and the prevention of this crime has been officially and unanimously established by the United Nations General Assembly. At the origin of this initiative was the Human Rights Council in Geneva, through a resolution presented by Armenia. As a descendant of genocide survivors, and, moreover, as a public figure, I have a particular responsibility. I carry the weight of their infinite suffering. It is our task to stand for their respect and dignity, and to make sure that oblivion and denial do not kill them a second time. Those who were annihilated in 1915, 1941 and 1994, were the Armenians, the Jews, the Tutsis… not for what they had done, but for who they were. It was me, but it was you too. Because at Der Zor, Auschwitz, and Kigali their target was humanity. The barbarism that has not been eradicated resurfaces under another mask. It can be observed in the fate of the minorities in the Middle East nowadays. Impunity has set the wrong pattern.

The year 2017 also marked the 25th anniversary of the establishment of diplomatic relations between Armenia and Switzerland. How would you assess Armenian-Swiss relations and what have been the main achievements during these 25 years?

Armenian-Swiss diplomatic relations were established only a quarter of a century ago, however, the friendship between the two peoples is not new.

The political dialogue between the two countries intensified after the opening of diplomatic missions in Switzerland and Armenia, with many reciprocal high-level visits, as well as due to the close collaboration in the framework of such international organizations as the United Nations, the Council of Europe, the Organization for Security and Co-operation in Europe (OSCE) and the International Organization of Francophonie.

I am also very happy that Switzerland hosted two recent summits of the Presidents of Armenia and Azerbaijan in the framework of the Nagorno-Karabakh peace process. I believe that settlement of this issue will contribute greatly to the overall security and stability in the region. Since 1990s the peace talks between Armenia and Azerbaijan have been mediated by the co-chairs of the OSCE Minsk Group (France, Russia, USA), the only internationally mandated body to mediate in the settlement of this conflict. The mediation hinges upon a package of proposals, which are based on such principles of international law as the nonuse of force, self-determination and territorial integrity.

The trilateral (Nagorno-Karabakh, Azerbaijan, Armenia) cease-fire agreements signed in 1994 and consolidated in 1995 shall be fully respected. In this regard, it’s important to have in place the investigative mechanism on the Nagorno-Karabakh contact line with Azerbaijan, which has repeatedly been called for by the Co-Chair countries. I hope the neighbouring country will agree and will not hinder this mechanism. This will save the lives of 18-year-old boys and civilians. The co-chairs have also been calling for the authorities to prepare their people for peace, not war. I hope their voices will be heard. Thirty years after Sumgait, the international community, including the United Nations, should be more vigilant and attentive in pushing for peaceful resolution, to which there is no alternative, for the sake of the people living in the region.

Is there anything else you would like to add?

Yes, I was glad to know that this year, in October, the heads of states of La Francophonie decided to hold its summit in Yerevan. This will be the largest event not only in the history of independent Armenia, but also of the Organization in the region. As a member of La Francophonie, Armenia shares its values of peace, solidarity, dialogue, the equality of peoples, human rights and cultural diversity, and will prioritize them during its presidency. The summit slogan – “Living together” reflects these humanitarian values, which, I am sure, can strengthen the cohesion of our societies and bring peace and prosperity to the francophone space.”