YEREVAN BESTSELLER 4/103 - ‘The Prophet’, ‘The Alchemist’ and ‘Steppenwolf’ among weekly top 10 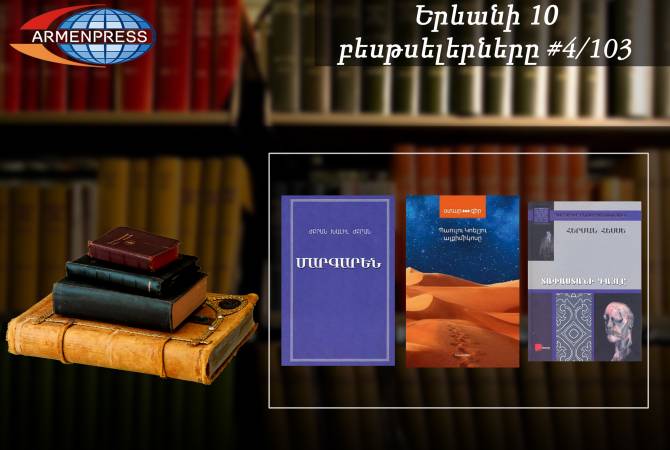 ‘Ville-Évrard’, another novel again by Mark Aren, is ranked second. A story evolving around Komitas, Edmund Forster, the psychologist who inspired Adolf Hitler that the latter was unique, guided by which the Nazi leader decided to conquer the world, resulting in millions of victims. It was Forster who saved Soghomon Tehlirian, who gunned down Talat Pasha, one of the organizers of the Armenian Genocide, from capital punishment. The refuge of Komitas, who survived the Armenian Genocide, was Ville-Évrard mental hospital in France.

‘The Alchemist’ by Brazilian writer Paulo Coelho is 4th. Originally written in Portuguese, it became an international bestseller translated into some 70 languages as of 2016. An allegorical novel, The Alchemist follows a young Andalusian shepherd in his journey to Egypt, after having a recurring dream of finding treasure there.

Milan Kundera’s ‘The Unbearable Lightness of Being’ comes next. It was published in 1984. The book chronicles the fragile nature of an individual's fate, theorizing that a single lifetime is insignificant in the scope of Nietzsche's concept of eternal return. In an infinite universe, everything is guaranteed to recur infinitely. In 1988, American director Philip Kaufman released a film adaptation.

‘Jonathan Livingston Seagull’ by American writer Richard Bach is 6th in the list. It is a fable in novella form about a seagull who is trying to learn about life and flight, and a homily about self-perfection. It was first published in 1970.

‘Flowers for Algernon’ by Daniel Keyes is next. The short story, written in 1958 and first published in the April 1959 issue of The Magazine of Fantasy & Science Fiction, won the Hugo Award for Best Short Story in 1960.

Oscar Wilde’s ‘The Picture of Dorian Gray’ captured the 8th place in the bestselling list of the week.  Dorian Gray is the subject of a full-length portrait in oil by Basil Hallward, an artist who is impressed and infatuated by Dorian's beauty; he believes that Dorian's beauty is responsible for the new mode in his art as a painter. Through Basil, Dorian meets Lord Henry Wotton, and he soon is enthralled by the aristocrat's hedonistic worldview: that beauty and sensual fulfillment are the only things worth pursuing in life.

‘The Prophet’ is ranked 9th in this week’s bestselling list. It’s a book of 26 prose poetry fables written in English by the Lebanese-American artist, philosopher and writer Kahlil Gibran. It was originally published in 1923 by Alfred A. Knopf. It is Gibran's best known work. The Prophet has been translated into over 40 different languages and has never been out of print.

‘Steppenwolf’ novel by German-Swiss author Hermann Hesse concludes this week’s list. Originally published in Germany in 1927, it was first translated into English in 1929. Combining autobiographical and psychoanalytic elements, the novel was named after the lonesome wolf of the steppes. The story in large part reflects a profound crisis in Hesse's spiritual world during the 1920s while memorably portraying the protagonist's split between his humanity and his wolf-like aggression and homelessness. Hesse would later assert that the book was largely misunderstood.