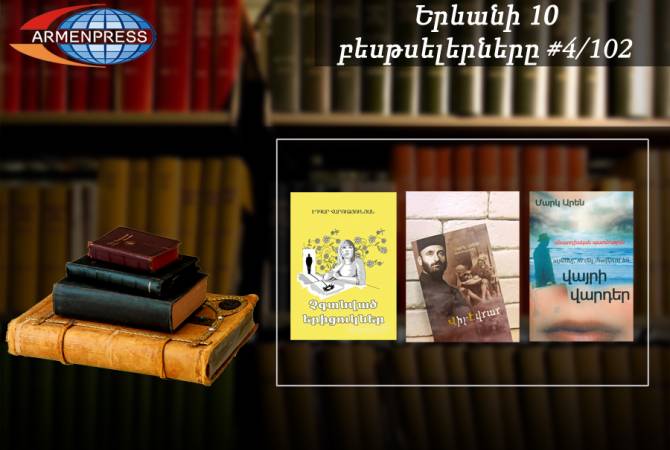 ‘Ville-Évrard’, another novel again by Mark Aren, is ranked second. A story evolving around Komitas, Edmund Forster, the psychologist who inspired Adolf Hitler that the latter was unique, guided by which the Nazi leader decided to conquer the world, resulting in millions of victims. It was Forster who saved Soghomon Tehlirian, who gunned down Talat Pasha, one of the organizers of the Armenian Genocide, from capital punishment. The refuge of Komitas, who survived the Armenian Genocide, was Ville-Évrard mental hospital in France.

‘Jonathan Livingston Seagull’ by American writer Richard Bach is 4th in the list. It is a fable in novella form about a seagull who is trying to learn about life and flight, and a homily about self-perfection. It was first published in 1970.

Edgar Harutyunyan’s another book ‘Art of Devotion or Ode to Rose’ is ranked 5th in this week’s list.

‘Collected Stories of Guy de Maupassant’ this week is 6th. It includes the author’s best works. Guy de Maupassant is an author of numerous stories, novels depicting France’s daily life. His numerous works have been translated and published in Armenian.

‘Flowers for Algernon’ by Daniel Keyes is next. The short story, written in 1958 and first published in the April 1959 issue of The Magazine of Fantasy & Science Fiction, won the Hugo Award for Best Short Story in 1960.

‘The Alchemist’ by Brazilian writer Paulo Coelho is 9th. Originally written in Portuguese, it became an international bestseller translated into some 70 languages as of 2016. An allegorical novel, The Alchemist follows a young Andalusian shepherd in his journey to Egypt, after having a recurring dream of finding treasure there.

‘The Red-Haired Woman’ by Turkish novelist and Nobel Prize laureate Orhan Pamuk concludes this week’s list. The Red-Haired Woman is the story of a well-digger and his apprentice looking for water on barren land. It is also a novel of ideas in the tradition.