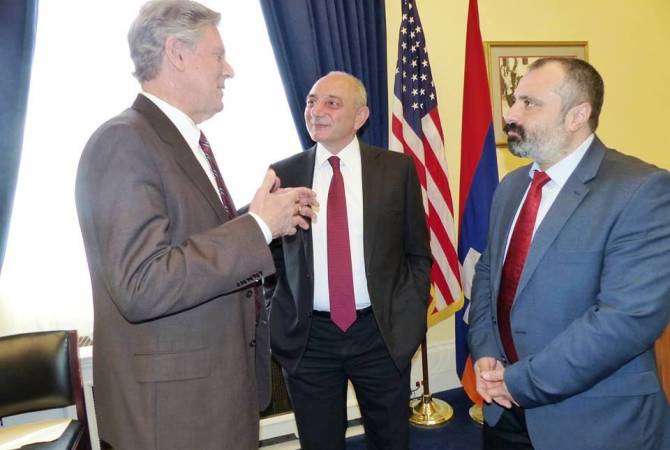 
YEREVAN, MARCH 15, ARMENPRESS. In a first-ever visit to the U.S. Capitol by an Artsakh (Nagorno Karabakh) head of state, President Bako Sahakyan delivered a powerful pro-peace and prosperity message to the American people, thanking U.S. legislators for ongoing aid programs and encouraging continued U.S. leadership toward a durable, democratic resolution of outstanding Artsakh-Azerbaijan status and security issues, ARMENPRESS was informed from the official website of the Armenian National Committee of America (ANCA).

“Our people are building an independent, sovereign, democratic state and civil society,” said President Sahakyan. “We are committed to these ideas consciously. They have been inherited from generation to generation, constituting part and parcel of the Armenian civilization.”

Citing Artsakh’s democratic and economic progress over the past 25 years, President Sahakyan noted “Representatives of numerous countries, including the United States, who periodically visit Artsakh, carry out observation missions in various elections also point to our achievements registered on this path. Artsakh people have earned the right to become a full member of the international community and to be integrated into the civilized world.”

President Sahakyan concluded, noting “Washington has a tangible role in maintaining peace and stability in our region, peaceful and just settlement of the Azerbaijani-Karabakh conflict conducting its mediation mission as a co-chair of the OSCE Minsk group.  Cementing and deepening ties with the United States of America have always been and will remain among the fundamental directions of our foreign policy.”

“Artsakh President Bako Sahakyan’s visit to Washington, DC marks a major milestone in U.S.-Artsakh relations – representing both a clear rejection of Baku’s reckless bid to block bilateral dialogue and a bold reaffirmation of America and Artsakh’s shared commitment to open discourse as the only viable path to peace,” said ANCA Executive Director Aram Hamparian.  “As we’ve long said, Artsakh is a very American story, the victory of a free people over foreign rule. So it’s particularly meaningful that Artsakh’s head of state was – in the spirit of the bilateral U.S.-Artsakh Travel and Communication Resolution – so very warmly welcomed in our U.S. Capitol.”

Opening up the Congressional briefing, Rep. Pallone cited the importance of lifting artificial barriers to dialogue and travel to Artsakh.  “When we were there (in Armenia) in September,” explained Rep. Pallone, “we were strongly urged by the Administration, by the State Department not to go to Artsakh, which I think is very wrong that they continue to do that.  That is one of the reasons that we introduced this bill (H.Res.697) – to make it clear that travel and communications with Artsakh – even though it is not recognized by the United States – is very important.”  Support for H.Res. 697, introduced in January, 2018, is growing with 12 cosponsors to date.  Congressman Pallone went on to stress the importance continued visits to Artsakh as well as the continuation of U.S. assistance to Artsakh and the implementation of the Royce-Engel proposals for peace in the region.

Congressional Armenian Caucus Co-Chair Jackie Speier (D-CA), one of two Members of Congress of Armenian descent, announced that she would be leading a Congressional delegation to Armenia and Artsakh this year “to help everyone understand and appreciate what a grand and prosperous country it is and how important it is for Artsakh to be recognized as part of Armenia.”

Following the briefing, Rep. Schiff told the ANCA of the importance of implementing the Royce-Engel proposals.  “That [the proposals], of course, are supported by Artsakh and Armenia but opposed by Azerbaijan, which has consistently been a belligerent and aggressor, but in the absence of that kind of deterrent, there is a grave risk that Azerbaijan may provoke a conflagration in the region,” said Rep. Schiff.  “As Aliyev struggles with conflicts and unpopularity at home and spends billions on his military, there is a great temptation to use that, and we have to insist upon the peace as well as hold those who violate it accountable.”

Congresswoman Anna Eshoo (D-CA), also of Armenian and Assyrian descent and from Rep. Speier’s neighboring district, spoke fondly of her trip to Armenia last September, and of her “Armenian family” present on Capitol Hill and across the United States, all dedicated to advancing pro-Armenia and Artsakh priorities.

During the Congressional luncheon and briefing, President Sahakyan announced the awarding of Presidential Medals of Gratitude to a number of U.S. legislators, including Senator Jack Reed (D-RI), House Foreign Affairs Committee Chairman Ed Royce (R-CA) and Ranking Democrat Eliot Engel (D-NY), and Representatives David Cicilline, Jim Costa, Brad Sherman, Adam Schiff, and David Valadao.  The Medal of Gratitude is awarded to individuals, organizations, and collectives for significant contribution in restoring and developing the economy, science, culture, social spheres of the NKR as well as for defending and promoting international recognition of the Republic.

After thanking President Sahakyan for the honor, Rep. Cicilline noted, “I know that the relationship between Artsakh and the United States is a strong and important one and we will continue to do everything we can to support the aspirations of your countrymen and women and be sure that they enjoy freedom and independence and self-determination.”  He went on to praise the active efforts of the Armenian community in his state in support of Artsakh freedom and recognition.  “Rhode Island was the first state in the country to recognize the independence of Artsakh,” said Rep. Cicilline, citing the efforts of ANC-Rhode Island leader Ani Haroian and his own staff member Lisa Sarkisian Tatarian.

Immediately after the briefing, Rep. Cicilline issued a separate statement marking the occasion of President Sahakyan’s visit, noting, “Since the fall of the Soviet Union, a new generation in Artsakh has grown up in freedom and under a democratic government of its own choosing.  Artsakh has continued to strengthen its democracy, having held several parliamentary and presidential elections. Freedom House has consistently rated Artsakh more democratic than Azerbaijan.”

Rep. Sherman explained that “For 22 years I have served on the Foreign Affairs Committee – and Mr. President, this award is very important to me because one of the first things I did on the Committee was to introduce an amendment which would provide direct aid to the people of Artsakh.  The State Department opposed it on the theory that it would be an implicit recognition of your independence. I thought, as they say in Silicon Valley, that’s not a bug, that’s a feature.  And so, we secured $12 million to help people who needed help, who were suffering as a result of war and hostility – and we implicitly recognized the Republic of Nagorno Karabakh – now the Republic of Artsakh,” noting the important next step of explicitly recognizing Artsakh’s independence.

“It was a great honor to be the first member of Congress in over a decade to touch soil in Nagorno Karabakh and see it for myself,” said Central Valley California Congressman David Valadao (R-CA), who travelled to Artsakh in September, 2017, after having successfully spearheaded the Valadao Amendment securing $1.5 million in U.S. assistance for ongoing demining efforts through the HALO Trust.  “I still remember driving around Nagorno Karabakh and seeing all the families, the kids outside their living lives.  You hear on the outside of the shelling, the sniper fire and the rocket fire in such a small country but people are living their lives just like our families here.  So the resilience, the strength, the courage, of so many people is amazing to see,” concluded Rep. Valadao.

“It was an honor to be awarded the Gratitude Medal by President Sahakyan today,” said Rep. Costa. We must continue to do all that we can to support the democratic independence of the Republic of Artsakh and the nation’s rightful exercise of self-determination.”  On February 27th, Rep. Costa issued a powerful video statement marking the 30th anniversary of the Sumgait pogroms against Armenians.  He was later joined by Representatives Pallone and Schiff in condemning the attacks and calling for justice for the victims.

President Sahakyan is on a week-long working visit to Washington, DC, where, in addition to meetings with Congressional leaders, he and his delegation will be meeting with media representatives and think tank experts.