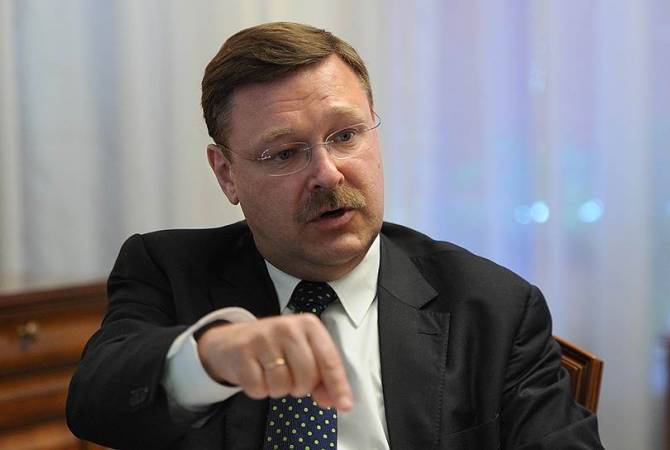 
YEREVAN, FEBRUARY 19, ARMENPRESS. Konstantin Kosachev, Chairman of the Committee on Foreign Affairs of the Federation Council of Russia, says the Armenian President Serzh Sargsyan’s speech at Munich Security Conference on February 16-18 was one of the most important speeches of the conference relating to security issues which was distinguished by its constructivism and balance.

“The discussion, which was attended by the Armenian President, the Moldovan Prime Minister, Commissioner for European Neighbourhood Policy & Enlargement Negotiations Johannes Hahn and me, was one of the examples that the agenda of the Munich conference becomes more comprehensive and starts presenting different views, and such tendency can just be welcomed. I have expressed my sincere gratitude to Serzh Sargsyan for his perfect speech as he had his constructive contribution to the discussion, made a balanced and responsible analysis on what is happening now in Armenia and on regional relations in general, as well as in a more global context where Armenia undoubtedly plays its unique role. Without exaggeration his speech was focused and was under the attention”, he told Armenpress.

Konstantin Kosachev said the conference participants were focused on Armenia’s multivector policy, in other words, the experience by which Armenia combines its participation in the EAEU and EU integration processes.

“This is really perhaps the only and unique case”, he said, recalling Ukraine’s experience. “The same didn’t happen in case of Armenia, and this agreement was made in accordance with Armenia’s interests with its whole cooperation range taking into account also its obligations in the EAEU. This is the example on how it is possible to act by finding a solution to hard and perhaps quite delicate matters by normal and constructive way. In 2012-2013, before the Ukrainian crisis, we proposed the EU and Ukraine to organize a similar discussion to avoid some contradictions: that time the EU gave us tough response stating that it is not a subject of discussion, it is the internal problem of that relations, but we all know what this resulted in”, the Russian official said, stating that it only can be welcomed that Armenia runs a right policy on the way of cooperation with different integration structures.