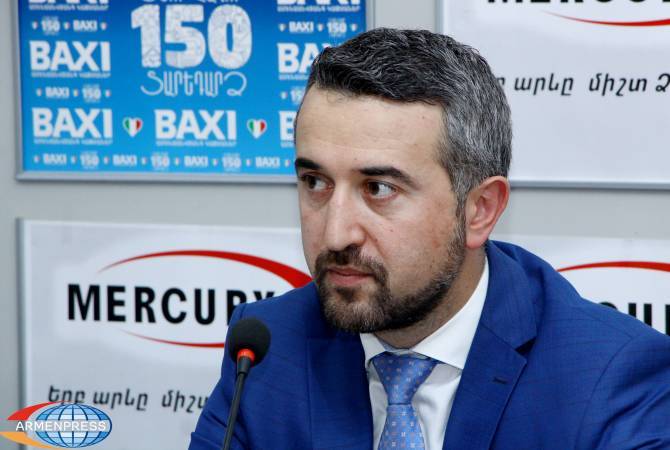 Ara Khzmalyan – director of the Tourism Development Foundation of Armenia, gave an interview to ARMENPRESS talking about the ongoing activities aimed at increasing the tourism flows to Armenia.

-Mr. Khzmalyan, what activities are planned for this year aimed at increasing the flights and number of tourists to Armenia?

-There is a simple logic according to which the presence of direct flights greatly contributes to increase in number of tourists. I think the actions taken by the State Tourism Committee to facilitate visa procedures will contribute to growth of tourism flow. But the direct flight must be nourished by marketing measures. People will be interested in our country and tourism potential, and of course the business will understand that it’s necessary to open direct flights to Armenia. For instance, it’s desirable to have a direct flight from Egypt. We know that there are millions of Christians in Egypt, in particular, the Coptic Christian community who can prefer Armenia as a first Christian country.

Last year minister Suren Karayan’s visit to Lebanon showed us that our country can be a very important destination for religious tourism. The Armenian community of Lebanon is 200 years old, the awareness on our country, culture is at the proper level. This year we plan to appoint a person as a representative to Lebanon whose agency is engaged in marketing campaigns. The awareness of country is a process which should never stop and have an end. Our representative will work not only in Lebanon, but also in the Arab countries of the Gulf. There is a problem of getting well acquainted with the market, understanding its features in order to implement targeted marketing programs. He knows that market quite well and is a Lebanese citizen. These actions will be taken also in other targeted countries.

We say Russia and usually understand Moscow and St. Petersburg, but the Russian Federation is a broader concept, rather than the two capitals. The entire northern part of Russia is considered as the most lucrative part. This means that serious steps must be taken there since there is a preference for sun, clean nature, tasty fruits, and thus, we need to attract these people to Armenia as much as possible.

-What concrete steps and activities are planned to be taken in the targeted markets, such as Russia, Iran, Arab and European countries, and China?

-The main task of the Tourism Development Foundation is to increase awareness on Armenia. This means that most of our activities is planned for the outside world. In this sense we have a number of events, international exhibitions, participation in thematic exhibitions on wine, pilgrimage, cuisine tourism, different advertising campaigns, holding Days of Armenia. We are going to publish articles in leading international journals. We also work on bringing bloggers and journalists to Armenia.

This year we plan to hold the presentation of the Russian Trace in St. Petersburg. We want to show the traces of Armenian-Russian cultural and historical ties in our country, such as historical monuments, written sources, and so on. All these is just needed to be well covered and presented. This is a new project and creates major interest among our Russian partners.

-What steps are being taken in terms of infrastructure development so that we can host more tourists every year?

-Fortunately, we have initiatives which launched last year and continue this year, such as the opening of hotels, people renovate their houses and provide to tourists in the form of guesthouses. This is a very important issue since during the season we face a problem of hosting tourists in hotels. We take steps to create an entertaining environment in communities as well.

-It’s quite a long time most of the tourists are not interested in smooth and asphalt streets, as well as in comfort. The adventure tourism rapidly develops, the private sector in Armenia carries out significant works on this path. There are foreigners who even buy houses in rural communities.

What the world needs today – clean food, natural and good environment, sun, sometimes silence, far from city noise. In line with this we have a great potential which is still not utilized. That is Armenia’s being as the first Christian country. Pope Francis visited Armenia, more than billions of people knew about our country’s Christian significance. Our country is rich of the relics of Christian saints, architectural monuments. I also want to state that the cuisine tourism is also developing in Armenia, I don’t remember a guest who is not impressed with the Armenian cuisine and hospitality.

Full interview is available in Armenian