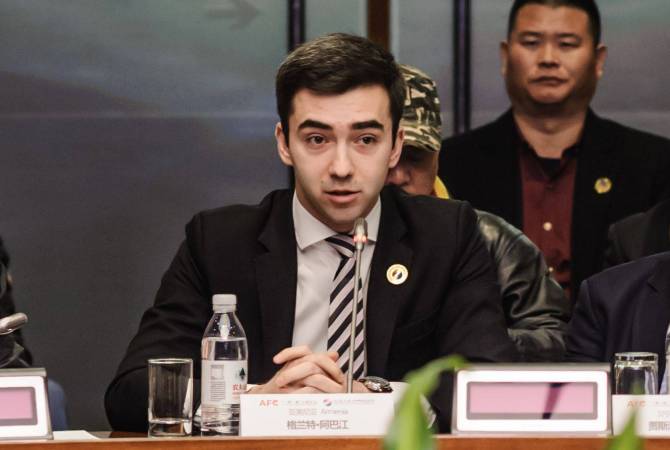 
YEREVAN, FEBRUARY 14, ARMENPRESS. Although over 30% growth of trade turnover volumes with China is impressive for Armenia’s commercial attaché to China, the active works will continue this year as well.

Hrant Abajyan, commercial attaché of Armenia to China, gave an interview to ARMENPRESS, presenting the works done so far and the future activities.

-Mr. Abajyan, China is one of Armenia’s key economic partners and targeted markets. What steps were taken in 2017 aimed at strengthening the Armenian-Chinese economic ties, attracting Chinese investments, as well as increasing our export volumes to China?

-Undoubtedly today China is one of Armenia’s key commercial partners. Last year different events were held both in the Chinese capital of Beijing and in other cities and provinces aimed at developing and deepening the Armenian-Chinese economic ties, meetings were held with different public and private companies which we introduced on Armenia’s economic situation, investment field and attractions. Substantive discussions were held on developing the commercial relations at various directions. We tried to provide the Chinese businessmen with comprehensive and accurate information on the economic-political situation in Armenia and the region, taking into account that sometimes the Chinese businessmen are not informed about the country, or have inaccurate, distorted information from different sources on our country and the region which can hinder the development of commercial and investment relations.

In addition to this, separate meetings, discussions and exchange of experience were held with the Chinese companies aimed at launching mutually beneficial cooperation in different spheres of Armenia’s economy. Thanks to this last year more than 30% growth in the Armenian-Chinese trade turnover was recorded. This is an impressive figure, but we will not be satisfied with this. The efforts of the ministry of economic development and investments and in particular the trade representation are aimed at constantly increasing this figure. In 2018 we will also take active steps to attract investments from China to Armenia and finding entry opportunities for Armenian goods to this targeted market.

-Last year the cooperation office opened in China with your and the Armenian Ambassador’s presence. To what extent the Armenian business is presented there and how are you going to engage the Armenian exporters to use this platform?

-Yes, as we said for many times, on November 17, Armenia’s cooperation office opened in Qingtao, China by the proposals and financing of the One Belt One Road innovative cooperation center which enables the businessmen to open the branches of their enterprises, present and sell their products. During the past weeks I have initiated meetings with representatives of different Armenian companies in Yerevan, discussed the opportunities and obstacles to enter the Chinese market. During the meetings with Armenian companies, operating in wine and alcoholic drinks production, agricultural canned food and chocolate production, we have tried to present in-detail the opportunities provided by the cooperation office.

Taking into account this, we, cooperating with the Chinese and Armenian public and private circles, constantly try to do everything to make the Chinese market more accessible and understandable for the Armenian business. As for Armenia’s cooperation office, I want to state that there is also an interest from the Armenian companies in this regard, and we hope the representations of Armenian companies will open in Qingtao as a result of working discussions in the near future, and thanks to this platform their products will be presented at the Chinese market.

-Recently, there are numerous talks on the Chinese market as a targeted tourism market. Are steps being taken to increase the number of Chinese tourists to Armenia?

-Today the Chinese market is the most important tourism market not only for Armenia, but also for the whole world. In this regard last year we tried to disseminate comprehensive information on Armenia’s tourism attractions and features. Here as well among the key problems is the presence of inaccurate and distorted information among the Chinese people. Works are being done at respective Chinese online information platforms aimed at spreading information on Armenia, as well as videos depicting Armenia’s tourism attractions. It’s worth mentioning that the videos made by the ministry of economic development and investments, the State Tourism Committee and the Development Foundation of Armenia were translated in Chinese for the Chinese audience. These activities will also continue this year. Moreover, this year we have launched with the Tourism Development Fund of Armenia a more targeted work with tour-operators actively operating in the Armenian and Chinese tourism markets. We will try to boost the number of Chinese tourists visiting Armenia. Armenia’s participation in a number of exhibitions on tourism and export fields is also expected.