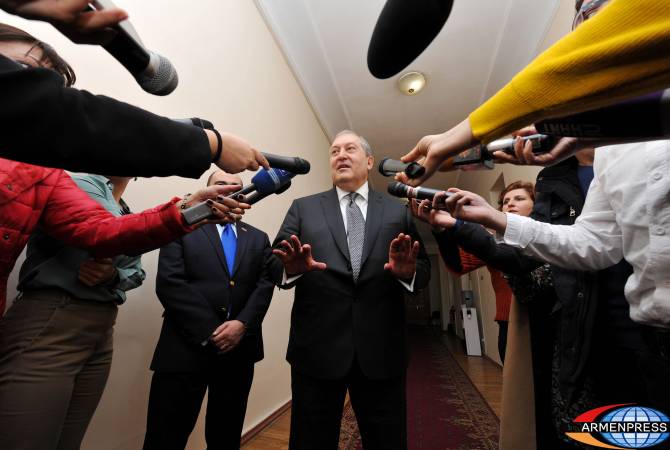 
YEREVAN, FEBRUARY 9, ARMENPRESS. Armen Sarkissian, candidate for the President of Armenia nominated by the Republican Party, commented on media reports according to which in the documents of one of the British companies he is presented as a citizen of the UK, therefore he cannot be nominated for the post of the President, reports Armenpress.

After the meeting with the Yelk faction representatives in the Parliament, Armen Sarkissian assured reporters that he refused from the UK citizenship in 2011. “There, where you are looking for a problem, is no problem. Yes, I have been a citizen of the Great Britain. In 2000 I have applied for receiving a UK citizenship, and I received it in 2002. After that I refused from the citizenship in 2011”, Armen Sarkissian said.

He added that he is a member of the boards of dozens of companies and organizations. “In some places it was registered that I am a British, and in other places it was registered that I am an Armenian. After refusing from the UK citizenship in 2011 I didn’t make an announcement on this, but I am known in all these places as Armen Sarkissian rather than as a British or an Armenian”, he said.

Commenting on media reports according to which he is presented as a UK citizen in the 2014 documents of the Eurasia House International, Armen Sarkissian said this company has been founded by him in early 2000s, and its subsidiary has been the Eurasia Centre of the Cambridge University. “It assisted more than 100 Armenian young people in receiving education in the UK, Harvard and other universities. In 2010 this company terminated its activity for different reasons, and the main company was frozen”, he said.

Asked why it is still written in these documents that he is a UK citizen, Armen Sarkissian said if they look at other companies, they will find documents where he is presented as the UK citizen. “Do you imagine, if someone refuses from the citizenship, so what, he should be withdrawn from all places?”, he noted.

He clarified that he received the UK citizenship since it was necessary for his activity at that time in order to visit different countries.

“I refused from the citizenship as I didn’t need it anymore”, he said.