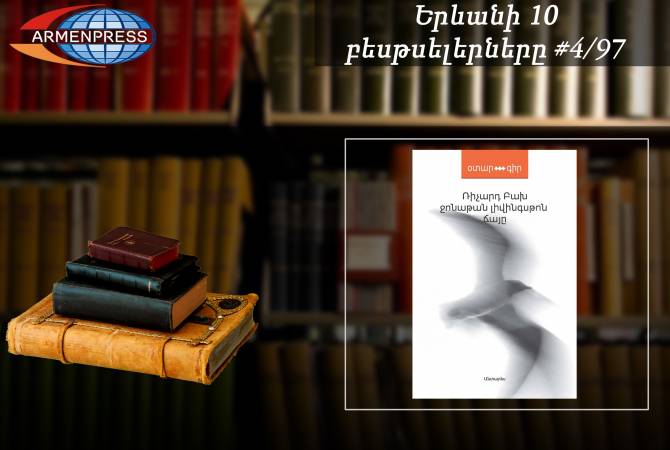 ‘Jonathan Livingston Seagull’ by American writer Richard Bach returned to the list capturing the 2nd place. The book tells the story of Jonathan Livingston Seagull, a seagull who is bored with daily squabbles over food. Seized by a passion for flight, he pushes himself, learning everything he can about flying, until finally his unwillingness to conform results in his expulsion. An outcast, he continues to learn, becoming increasingly pleased with his abilities as he leads a peaceful and happy life. The book has been translated by Naira Harutyunyan.

‘Three Comrades’ by German author Erich Maria Remarque is a novel first published in 1936. It is written in first person by the main character Robert Lohkamp, whose somewhat disillusioned outlook on life is due to his horrifying experiences in the trenches of the First World War's French-German front. He shares these experiences with Otto Köster and Gottfried Lenz, his two comrades with whom he runs an auto-repair shop in late 1920s Berlin. Remarque wrote the novel in exile. The book is ranked 5th in the list.

Stefan Zweig’s ‘Collected Stories’ this week is ranked 6th. Zweig was an Austrian novelist, playwright, journalist and biographer. At the height of his literary career, in the 1920s and 1930s, he was one of the most popular writers in the world. The book was translated by Ara Arakelyan and Margarit Arakelyan.

‘1984’ by George Orwell is 7th. The book is labeled as “banned” in many countries of the world.

Oscar Wilde’s ‘The Picture of Dorian Gray’ is ranked 8th. Dorian Gray is the subject of a full-length portrait in oil by Basil Hallward, an artist who is impressed and infatuated by Dorian's beauty; he believes that Dorian's beauty is responsible for the new mode in his art as a painter. Through Basil, Dorian meets Lord Henry Wotton, and he soon is enthralled by the aristocrat's hedonistic worldview: that beauty and sensual fulfillment are the only things worth pursuing in life.

‘The Fault in Our Stars’ is the sixth novel by author John Green, published in January 2012. The title is inspired by Act 1, Scene 2 of Shakespeare's play Julius Caesar, in which the nobleman Cassius says to Brutus: "The fault, dear Brutus, is not in our stars, / But in ourselves, that we are underlings." The story is narrated by Hazel Grace Lancaster, a sixteen-year-old girl with cancer. Hazel is forced by her parents to attend a support group in the "Literal Heart of Jesus" where she subsequently meets and falls in love with 17 year old Augustus Waters, an ex-basketball player and amputee. The novel is ranked 9th.

‘The Alchemist’ by Brazilian writer Paulo Coelho concludes this week’s list. Originally written in Portuguese, it became an international bestseller translated into some 70 languages as of 2016. An allegorical novel, The Alchemist follows a young Andalusian shepherd in his journey to Egypt, after having a recurring dream of finding treasure there.