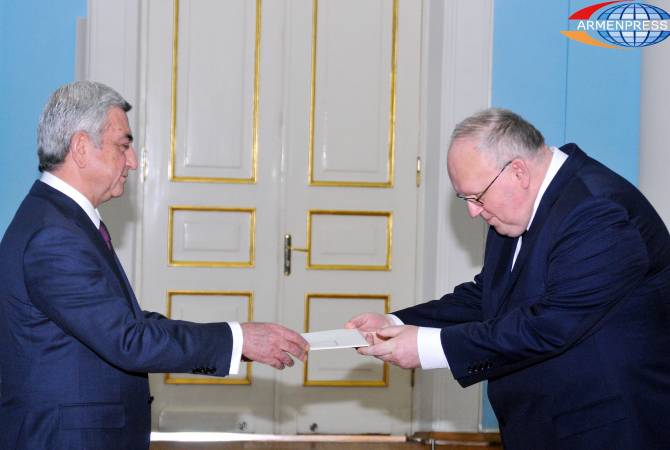 The Armenian President congratulated the Ambassador on his appointment and wished him success expressing hope that the Ambassador with his great diplomatic experience and activity will contribute to the strengthening of the Armenian-Polish relations and expanding the cooperation agenda. Serzh Sargsyan said with satisfaction that Armenia and Poland have always had constructive and warm relations.

The Polish Ambassador thanked the President for the reception and considered his number one task the consistent work on deepening the Armenian-Polish economic ties that have great potential, as well as increasing the trade turnover volumes between the two countries.

The Armenian President and the Polish Ambassador discussed issues relating to the mutual cooperation at international structures at the multilateral format.

They also touched upon the development of the Armenian-Polish cooperation after the signing of the Armenia-EU Comprehensive and Enhanced Partnership Agreement (CEPA).

The officials attached great importance to boosting the inter-parliamentary dialogue from the perspective of strengthening the inter-state ties.

At the meeting the President and the Ambassador also exchanged views on the negotiation process over the peaceful settlement of the Nagorno Karabakh conflict.