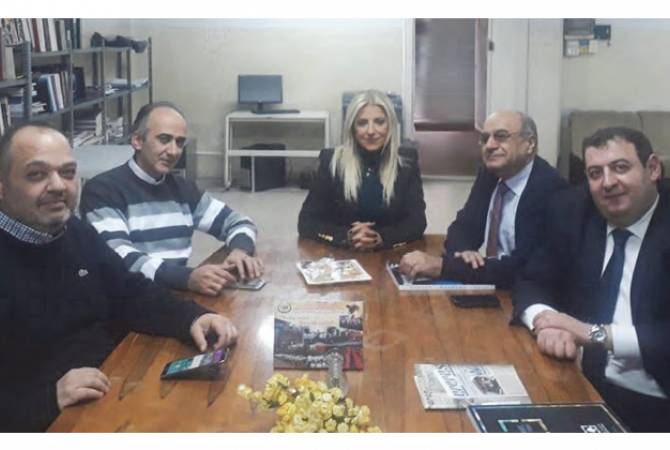 
YEREVAN, FEBRUARY 7, ARMENPRESS. Aram Ananyan, director of ARMENPRESS news agency, Suren Danielyan, director of the Diaspora center of Armenia’s State Pedagogical University and Sevak Hakobyan, editor-in-chief of the Beirut-based Zartonk Daily were hosted in the Ararad Daily HQ in the Lebanese capital on February 5, as part of a visit on the occasion of Zartonk Daily’s 80th anniversary celebration.

During the meeting the sides talked about issues relating to the development of media and the future, different opinions were voiced and the upcoming 100th anniversary of the establishment of ARMENPRESS was touched upon.

Mr. Ananyan spoke about the specificities of the news agency’s work, mentioning that this year ARMENPRESS is preparing to realize multilingual programs in numerous directions. He emphasized that ARMENPRESS is always ready for partnership – by combining common work projects.

The guests welcomed the 80th anniversary of establishment of Ararad, congratulated the executives and wished success.

Ararad Daily was established in 1937.